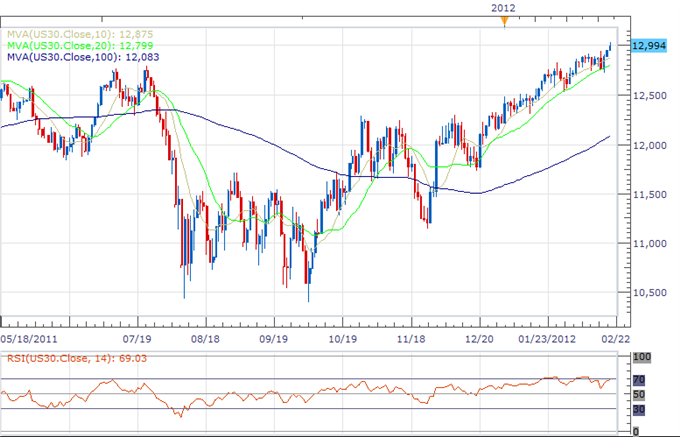 Technical: Remains very well supported on any form of a dip with the 20-Day SMA continuing to prop. However, the market is trading by multi-week highs and daily studies are starting to track in overbought territory to warn of short-term structural shift. . But, a close back below the 20-Day SMA will be required to trigger bearish price action and open deeper setbacks.

Fundamental: Markets have been bolstered recently by speculation that European finance ministers will settle their remaining differences over a Greek bailout at today’s EU summit. Increased commodity buying has also helped market sentiment. US equity markets are closed today for US President’s Day and will reopen tomorrow. 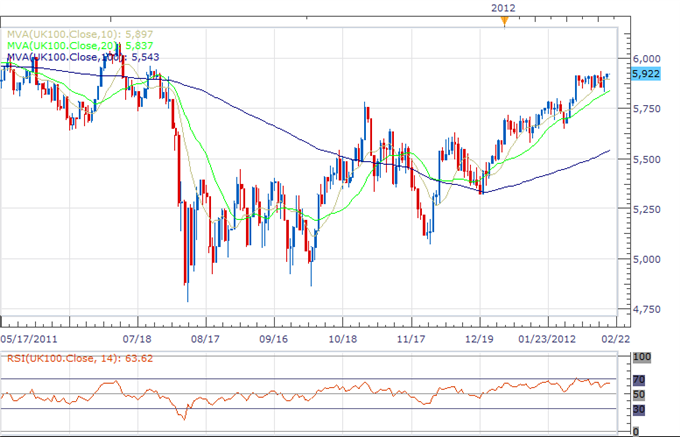 Technical: While the trend in this market remains bullish for the time being, we are starting to see signs of a potential bearish reversal. A close back below the 20-Day SMA will be required to accelerate further and expose more significant support by the January 30 previous higher low at 5,649. A daily close back above 5,950 negates and gives reason for pause.

Fundamental: The market impact of yesterday’s decision by Iran to cut oil exports to the UK remains to be seen. Iran is OPEC’s second-biggest oil supplier. Meanwhile, home prices in London have surged near to an all-time record as a supply shortage helps sellers. Elsewhere, UK coalition leader Cameron is facing scrutiny of current deficit-cutting measures, with Labor politicians arguing for more government stimulus ahead of next month’s budget. 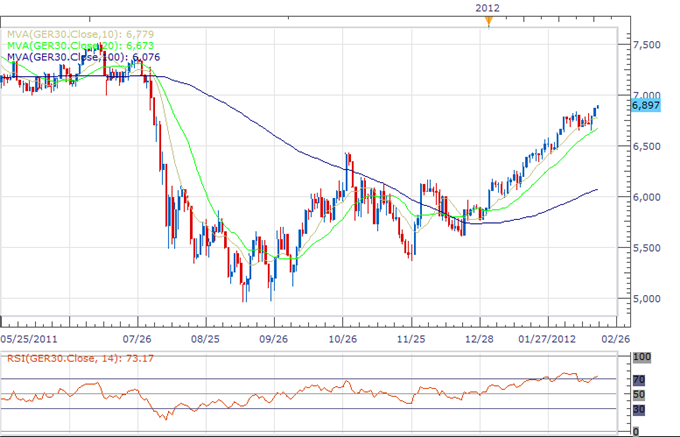 Technical: Still no signs of reversal just yet despite daily studies tracking into overbought territory on the daily chart. Still, while the up-trend remains intact, there are risks for a significant short-term pullback ahead. Look for a break below the 20-day SMA to confirm short-term shift and open the door for an acceleration of declines. Selling rallies towards 7,000 could also prove to be a compelling but more risky counter-trend strategy.

Fundamental:Greek optimism is pulling the Euro and correlated markets higher. While German leaders were silent today, a number of regional key players including the Greek and French finance ministers said that Greece has met the criteria for a bailout. Finnish sources were more apprehensive in a sign that Helsinki could try to obstruct a deal today. A disruption in schedule could spark unease among investors and disrupt the narrowing bond yields recently seen out of embattled EU countries like Italy and Spain. Elsewhere, German leader Merkel has nominated Joachim Gauk, a former pastor and pro-democracy activist, to replace outgoing German President Wulff. 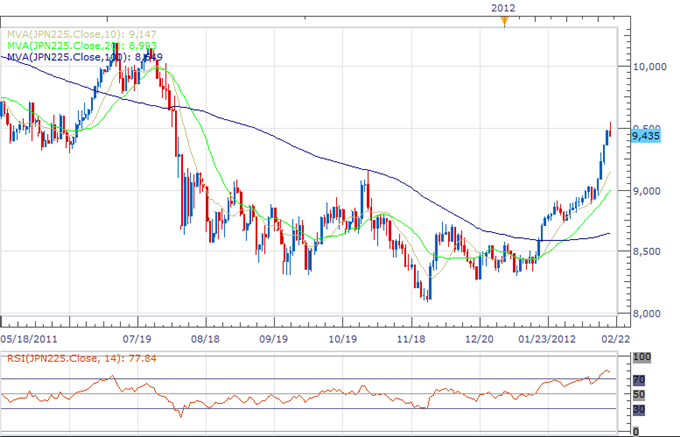 Fundamental: Markets here remain overbought on Greek optimism, and a turnaround seems likely after today’s EU summit no matter the result of the deliberations. Meanwhile, overnight data showed Japan’s trade deficit widening to record levels. Exports have been locked in a slump which Japanese authorities hope to reverse by encouraging a weaker Yen. 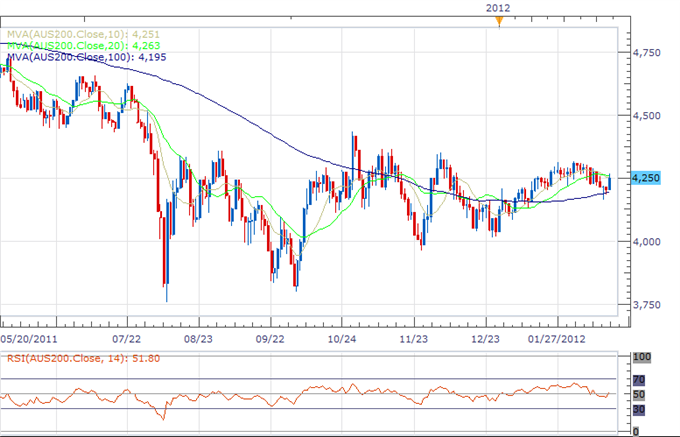 Technical: The relative underperformance in this market continues with the index breaking back below the 50/100-Day SMAs and continuing to point to more weakness ahead. Look for fresh declines over the coming days towards the 4,000 area, with rallies now expected to be very well capped ahead of 4,300. Ultimately, only a break back above 4,300 would delay outlook and give reason for pause.

Fundamental:Commodities have been surging recently, fueling a comeback in correlated Australian equity markets.Hedge funds have increased commodity buying to its highest level in almost five months on signs that a rescue plan for Greece and faster U.S. growth will bolster demand as supply shrinks. Meanwhile, Australian PM Gillard has downplayed speculation that she will resign amid a challenge to her leadership by current Foreign Minister Rudd.