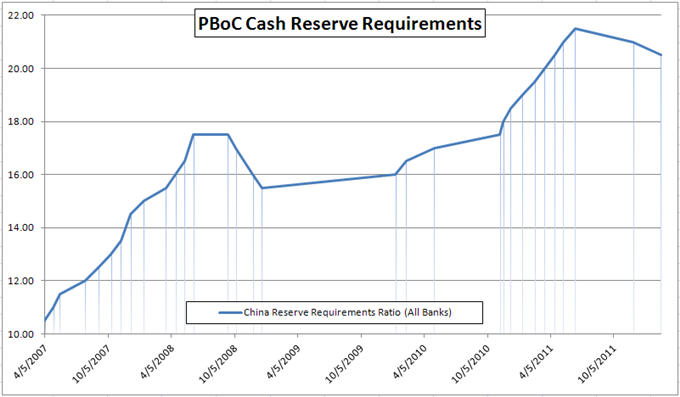 Risk currencies took off in early pre-Asia trading, led by reports that Greece was close to receiving its next tranche of bailout funds in time for its March 20th bond payment. The Australian and New Zealand dollars led the gainers on a surprise announcement by the People’s Bank of China to cut reserve requirements for major banks, signaling a possible turn in monetary policy. The yen continued to slide against majors on the Bank of Japan’s continued easing.

As the deadline of March 20th approaches, markets will remained focused on developments in Greece. With two major gantries cleared so far with the approval of new rounds of budget cuts last week and possible German and Troika approval at a scheduled February 20th meeting, Greece still awaits the outcome of negotiations on private bondholders. Currently, deliberations are still ongoing over the rate of the newly rolled-over sovereign issues, although the European Central Bank have helped to quell anxiety with signals to continue backing sovereign issues.

Oceanic dollars led gainers in early trading on a surprise announcement by the People’s Bank of China to cut key reserve requirement ratios by 50 basis points to 20.50%. China’s central bank cited easing in inflation pressures and additional concerns over Europe as main factors. Although reserve requirement changes are the first line of policy changes for the bank and are not as effective as interest rate changes, the pivot in increases from late 2008 may indicate continued “fine-tuning” of China’s monetary policies.

At the time of writing, the New Zealand and Australian dollars led gainers on possible continued scope of Chinese easing, with the Euro and Canadian dollar not far behind. The yen continued on its 3 day losing streak as the Bank of Japan’s new policies and inflation target sapped the haven status of the currency.