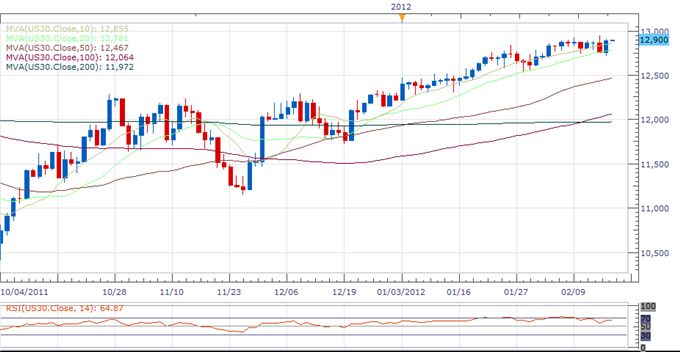 Technical: Remains very well supported on any form of a dip with the 20-Day SMA continuing to prop. The market is now in a period of short-term consolidation and a break back above 12,953 will accelerate and open a fresh upside extension. However, inability to establish above the latter could open a more meaningful bearish reversal. A close back below the 20-Day SMA will be required to trigger bearish price action and open deeper setbacks.

Fundamental: Stocks are well supported on the increased possibility of a Greek deal emerging from next Monday’s EU summit. Economic growth combined with contained inflation expectations have bolstered market sentiment. Economists predicted today that a gauge of U.S. leading indicators will advance for a fourth month in January as the cost of living increases 0.3 percent. Meanwhile, it will be interesting to see how markets digest today’s inflation reading. 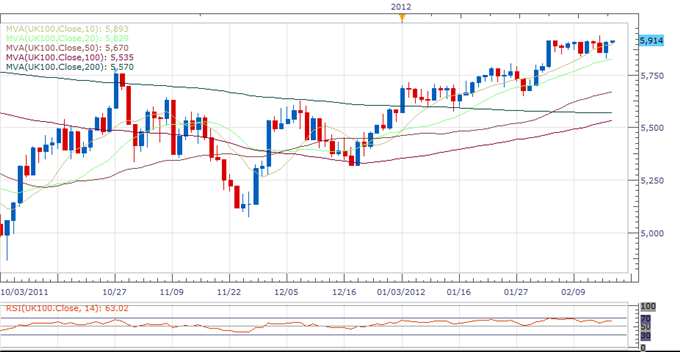 Technical: While the trend in this market remains bullish for the time being, we are starting to see signs of a potential bearish reversal. A close back below the 20-Day SMA will be required to accelerate further and expose more significant support by the January 30 previous higher low at 5,649. Back above 5,950 negates and gives reason for pause.

Fundamental:. A significant jump in UK retail sales today is expected to boost market sentiment here. Increased optimism prior to Monday’s EU summit talks has also been lifting spirits and prices, as HSBC shares led the banking sector higher. Bank of England Governor King this week referenced cooling inflation as a boost for consumers in the UK. King added that the economy is expected to “gradually” recover its losses this year as global markets attempt to regain steam after the European debt crisis. 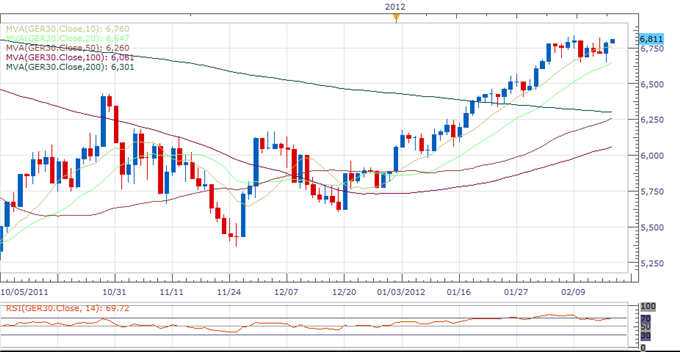 Technical: This market could finally be on the verge of rolling over after being very well bid in 2012 following the latest daily close below the 10-Day SMA. This past Wednesday was the first time the market closed below the short-term SMA this year and with daily studies looking stretched, the bearish close now warns of the possibility for an acceleration of declines over the coming sessions back into the 6,400’s. Still, we would need to see a break back below 6,650 to confirm bearish bias and officially alleviate topside pressures.

Fundamental:Stocks here remain well bid on Greek optimism. Although Germany has been a leader in demanding tighter oversight of aid money, and is believed to want to avoid a two-step vote on a bailout and bond-swap on Monday, veterans of 2008’s Lehman Brothers crash today warned EU leaders against pushing Greece too far as they impose aid conditions. The Greek bailout terms are seen to be largely in the hand of Germany, which is Europe’s largest economy. The resignation of the German President today is not seen to have influenced markets so far. 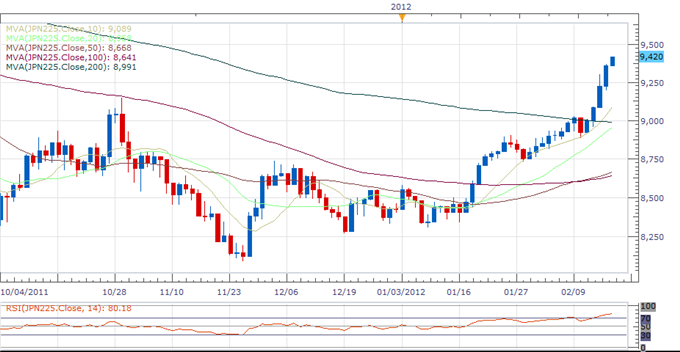 Fundamental: Japanese markets continue in a strongly bullish breakout which sees the daily RSI highly overbought. Helped by a Yen that recently reached a 4-month overall low, markets were propped today by strong gains in auto manufacturing giant Honda. The BoJ today released the Minutes to their Jan 23-24th meeting, with some members saying the bank needs to be prepared to take policy action while assessing risks. 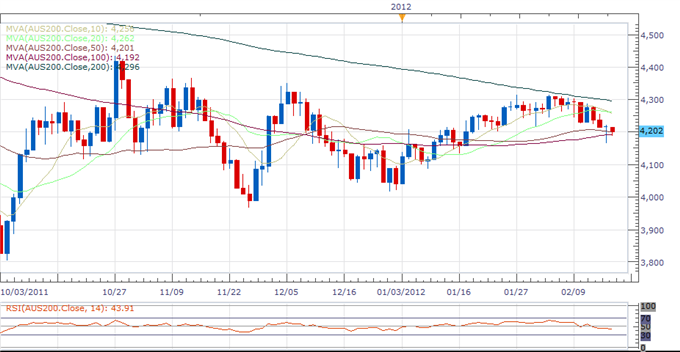 Technical: The relative underperformance in this market continues with the index breaking back below the 50/100-Day SMAs and continuing to point to more weakness ahead. Look for fresh declines over the coming days towards the 4,000 area, with rallies now expected to be very well capped ahead of 4,250. Ultimately, only a break back above 4,250 would delay outlook and give reason for pause.

Fundamental:Stocks didn’t move much today after yesterday’s US session rally, but Aussie stocks might receive a short-term boost by comments from US hedge fund billionaire Paulson advising a bullish commodity market. Meanwhile, Aussie treasury chief Parkinson saidIn an interview with The Sydney Morning Herald that the country is much too gloomy over the ongoing European debt crisis and the economic outlook is much more promising than Australians realise.