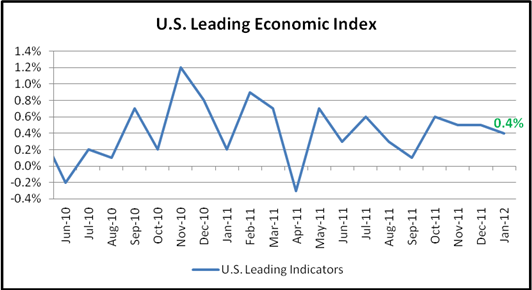 The U.S. Leading Economic Indicator, a gauge of the economic outlook for the next three to six months, rose for the fourth month in January, pointing to positive conditions in the world’s largest economy in early 2012. The indexadvanced 0.4 percent in January, following an upwardlyrevised 0.5 percent gain in December and 0.3 percent rise in November, the Conference Board reported today. The reading, however,missed median projections of a 0.5 percent gain from 48 economists surveyed by the Bloomberg News.

Seven of ten components made up an increase in the December leading index, led by financial and credit indicators and average workweek in manufacturing. Stock prices indicator surged 0.17 percent after rising 0.05 percent in December and 0.06 percent in November. Interest rate spread continued its upward trend, up 20 percent, after FOMC Committee decided to continue the program to extend the average maturity of its Treasury holdings last month.

Consumers’ outlook about the economy remained pessimistic, though slightly less so. It’s obvious that U.S. economic recovery has been exposed to risks from the prolonged and intensified turmoil over the Eurozone debt crisis. However, improved labor condition coupled with recent upbeat fundamental news somewhat stoke consumer confidence. 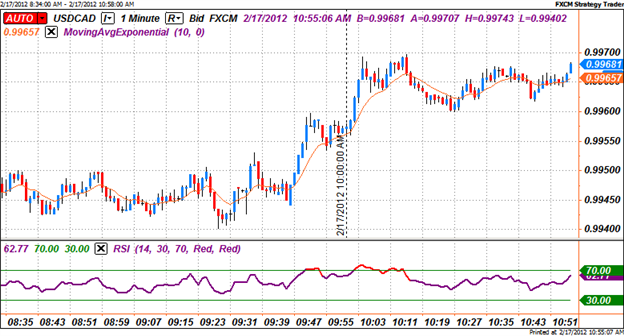 The U.S. dollar trades mixed during the North American morning trade as the reserve currency weakens versus the euro, pounds and kiwi while strengthens against yen, loonie and aussie. As can be seen from the 1-minute USDCAD chart above, the greenback edged 20 pips higher versus the loonie from 0.9955 to 0.9970 following the leading indicator report. At the time this report was written, the U.S. dollar trades at $C0.9968