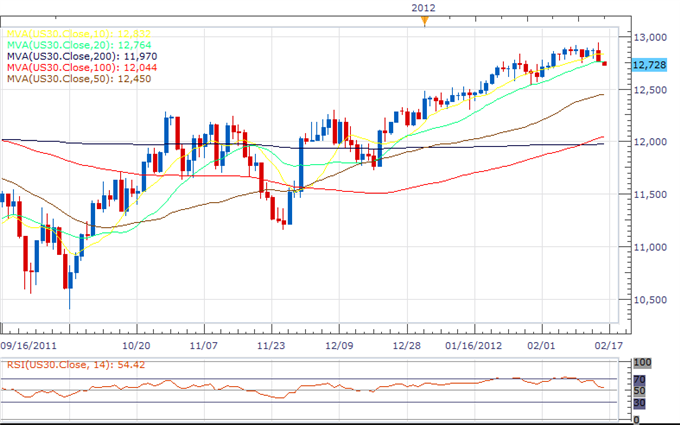 Technical: Rallies appear to have stalled out for now and the market looks like it could be in the process of carving a meaningful short-term top. The latest break back below 12,742 and the 20-Day SMA is significant, with the price dropping below the 20-Day SMA for the first time since late 2011, and also triggering a double top on the daily chart which opens a measured move downside extension exposing the 12,500 area over the coming sessions. Ultimately, only back above 12,953 delays outlook and gives reason for pause.

Fundamental: Fed officials are reportedly keeping option open for a third round of bond purchases. The Federal Reserve is evaluating the most recent economic data to look for weak areas and inflation-related developments, though a recent batch of positive employment data is said to have made certain FOMC members less inclined towards increased bond purchases. Meanwhile, Moody’s is rumored to be considering a downgrade by up to three levels of influential global banks including Credit Suisse and Morgan Stanley. 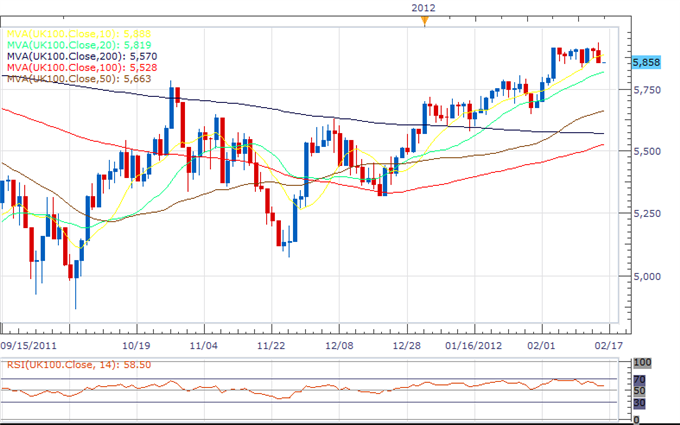 Fundamental: Markets should get a boost from a rise in UK consumer confidence, which increased to a five-month high on a more favorable economic outlook. Market players are hoping that the UK will avoid a double-dip recession. Inflation has also slowed recently as a sales tax increase from Jan 2011 dropped out of calculations. Meanwhile, Exchequer Chancellor Osborne is said to be looking outside the Bank of England for a successor to Mervyn King, which would be the first such move in 30 years. 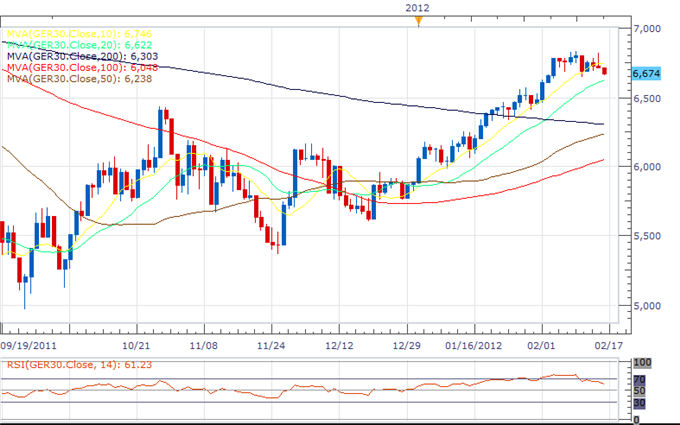 Technical: This market could finally be on the verge of rolling over after being very well bid in 2012 following the latest daily close below the 10-Day SMA. This is the first time the market has closed below the short-term SMA this year and with daily studies looking stretched, the bearish close now warns of the possibility for an acceleration of declines over the coming sessions back into the 6,400’s. Only above 6,841 negates and gives reason for pause.

Fundamental: Markets have been struggling with the delayed execution of the second Greek bailout package. EU officials have been throwing a damper on the recent Greek ratification of austerity measures, with the Dutch FinMin even saying today that the bailout might be possible after Greek elections, which are scheduled for April. The Moody’s bank downgrade is also thought to be weighing on market sentiment. 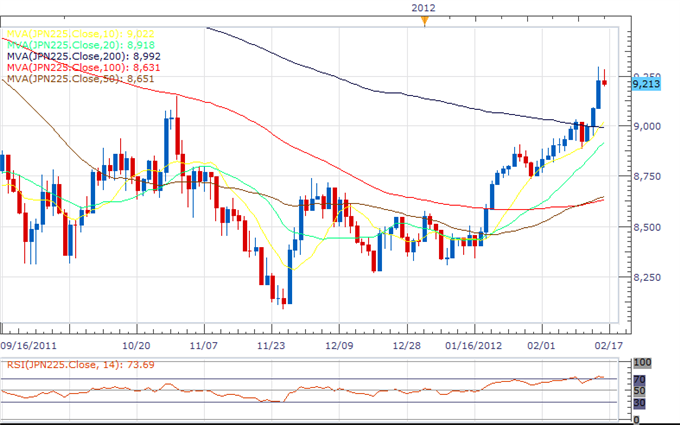 Fundamental: Markets are down on broad based risk liquidation and contagion themes, but losses have so far been limited as a weaker Yen increased exporters’ outlooks. Elsewhere, Bank of Japan Shirakawa was on the wires with some optimism after saying that strains in Japan’s money markets have eased since year end, and that lending confidence of domestic banks is improving. 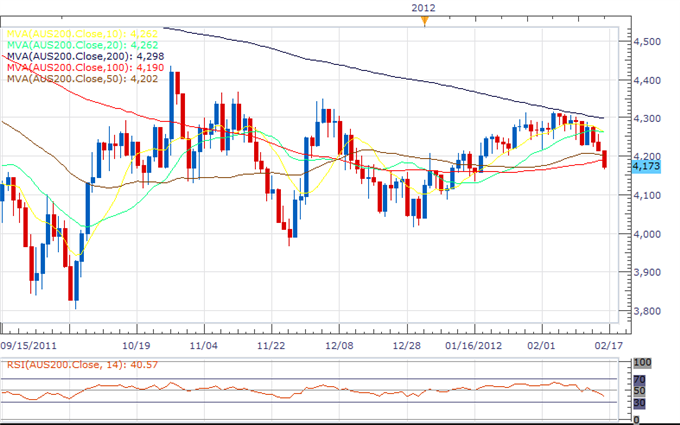 Technical: The relative underperformance in this market continues with the index breaking back below the 50/100-Day SMAs and continuing to point to more weakness ahead. Look for fresh declines over the coming days towards the 4,000 area, with rallies now expected to be very well capped ahead of 4,250. Ultimately, only a break back above 4,250 would delay outlook and give reason for pause.

Fundamental:A very solid employment report overnight has not yet translated into stock market gains in Australia, with broader market themes weighing on the risk correlated economy. Australian markets erased earlier gains today ahead of uncertainty going into next Monday’s EU summit which is expected to decide on a second bailout for Greece.