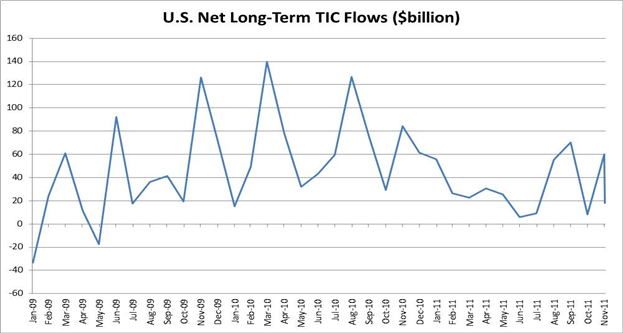 A report released today by the U.S. Department of the Treasury revealed that foreign demand for U.S. financial assets cooled dramatically in December. According to the Treasury International Capital (TIC) statement, long-term net purchase of U.S. assets declined to $17.9 billion in December from November’s figures of $61.3 billion (revised from $59.8 billion). The print fell well short of the median projection of $45.0 billion net buying from a Bloomberg survey of economists, reflecting optimism that Europe would resolve its debt crisis and improvements in risk sentiments during that period.

China, the largest foreign holder of U.S. Treasury securities, decreased its holdings by $31.9 billion, reflecting the shift in global risk appetite during December. 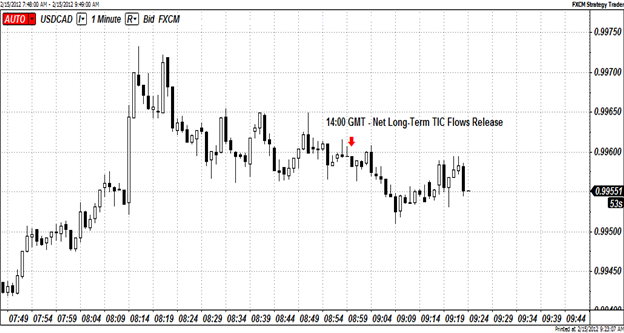 Immediately following the data release, the greenback weakened slightly against most of the other major currencies as the market reacted to the disappointing figures. The U.S. dollar slipped by 8 pips against the Canadian dollar before the market corrected back towards levels seen before the data release.

The slight drop in the greenback could also be somewhat attributed to the large disparity between the long-term net purchase figure of $17.9 billion and the trade deficit of $48.8 billion in December. Typically, the market likes to see purchases be much stronger than the funding needs of that month’s trade deficit to indicate that there is enough funding to cover the cash outflow.

Nonetheless, with continuing concerns about a disorderly Greek default, we would expect to see investors flock back to quality assets. This will play a large role in maintaining a healthy appetite for U.S. treasury securities among global investors.