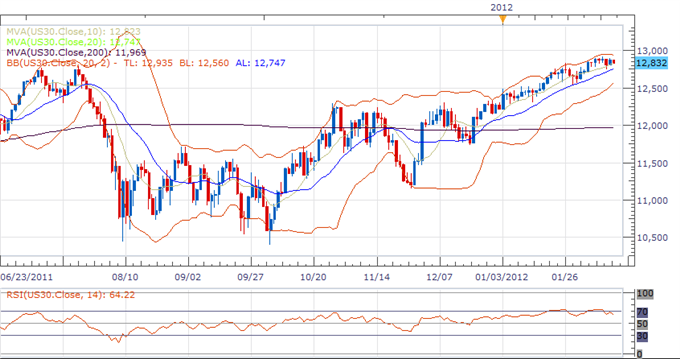 Technical: The market remains very well bid on any form of a dip but is starting to look stretched with daily studies tracking into overbought territory. The 20-Day SMA is key here and while the price holds above this shorter term moving average, the up-trend will remain intact. However, a break and close below the 20-Day SMA will suggest that the market is ready for a more significant corrective pullback which would further accelerate on a drop back below the previous higher low from January 30 at 12,528.

Fundamental: US markets are expected to receive a boost from rising industrial production in January. The data is set for release later today and economists are predicting a rise of 0.7%. A rebound in the US auto industry has prompted the expected industrial gains, but a weaker reading should put a damper on markets. Meanwhile, a tentative deal has been reached in the US Congress on the controversial proposed payroll tax reduction. Although the deal is not expected to be conclusive, it may prove a stabilizing force. 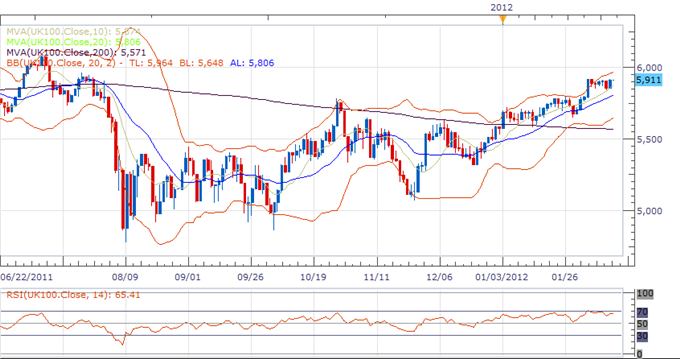 Fundamental: UK markets gained after China’s latest pledges of help to the beleaguered Eurozone. Meanwhile, an investigation into libor is said to have exposed collusion and a lack of banks’ internal controls. JPMorgan and HSBC are allegedly mentioned in the investigation. 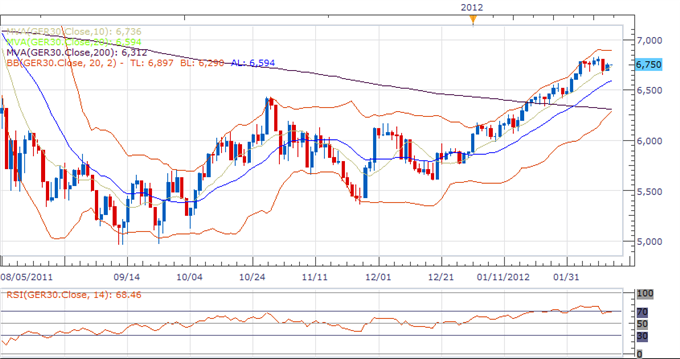 Technical: This market has been very well bid since late 2011 and continues to remain supported on dips towards the 10-day SMA. However technical studies are starting to look a little stretched and we would warn of the possibility for a bearish reversal over the coming sessions. We have not yet seen a clear daily close below the 10-Day SMA in 2012, and a close below this short-term SMA will likely be the trigger for the anticipated pullback. Back above 6,841 negates and gives reason for pause.

Fundamental: German markets received a bounce on the back of renewed Chinese aid pledges to Europe. German Q4 2011 GDP released earlier today showed mixed results, with the quarterly figure showing slight gains and the yearly reading dropping somewhat from expectations. However, all eyes at this point remain on Greece with statements from the German Finance Ministry implying that German authorities have little faith in Greek ability to meet the Troika’s expectations. Meanwhile, the German press is reporting that Chancellor Merkel’s coalition ally Schaeffler of the FDP opposes Greek aid. 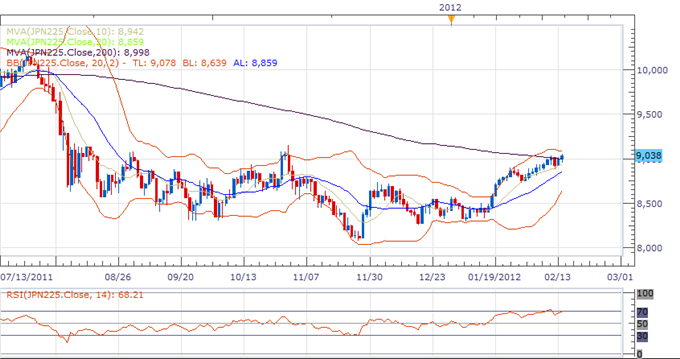 Technical: The market looks like it could be in the process of a bullish breakout following a major bout of consolidation. The establishment back above the 200-Day SMA is encouraging and there are risks from here for a push towards next key resistance by psychological barriers at 9,500 further up. However, daily studies are highly overbought at current levels and we would recommend that bulls proceed with caution over the coming days.

Fundamental: Markets are riding the wave of the Bank of Japan’s increased quantitative easing program. Chinese support of Europe is thought to also be playing a role in market confidence here. Correspondingly, the Yen’s slide versus the US Dollar and Euro is thought have lifted exporters’ outlook. 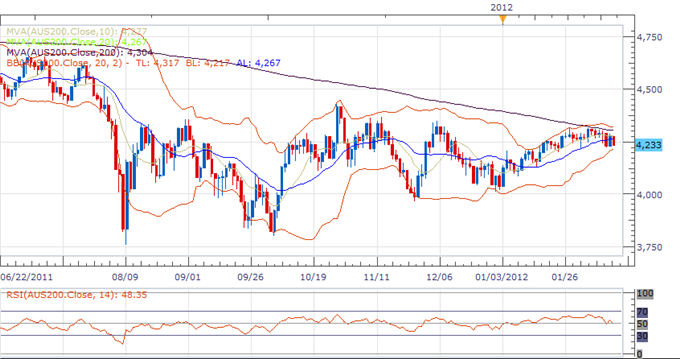 Fundamental:Gains in the Australian Dollar are not yet translating into equity market gains, notwithstanding a hike in Australian consumer confidence reported overnight. Meanwhile, Australia’s largest bank the Commonwealth Bank of Australia reported that first-half profits rose 19 percent as fewer loans soured.