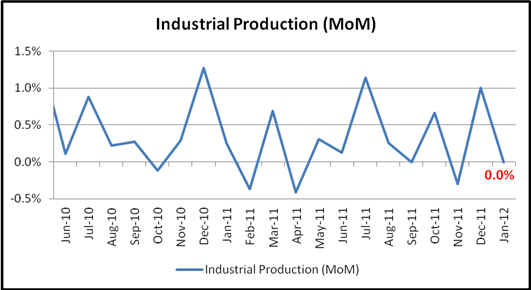 U.S. Dollar Bounces Back though Industrial Production Flat in January

THE TAKEAWAY: U.S. Industrial Production was Unchanged in January> Increase in Manufacturing was Offset by Declines in Mining and Utilities >U.S. Dollar Bounced Back

Industrial production in the United States disappointingly flatted in the first month of 2012 as an increase in manufacturing was completely offset by declines in mining and utilities. The reading missed consensus forecasts as economists polled by Bloomberg survey had called for a gain of 0.7 percent. Meanwhile, December total industrial production have advanced 1.0 percent compared with 0.4 percent gain initially reported. The noticeably upward revision resulted from higher output for various manufacturing and mining industries. Besides, capacity utilization ratedecreased 0.1 percent to 78.5 percent in January, 1.8 percentage points lower than its long-run average from 1972 to 2011.

Manufacturing output, which accounts for more than 70 percent of industrial productions, rose 0.7 percent in January, following 1.5 percent advance in the previous month. The risewas triggered by 6.8 percent jump in the output of motor vehicles and parts. In contrast, the output of utilities fell2.5 percent in the month after having dropped 2.5 percent in December due to lower demand for heating in the warmer-than-expected winter. Likewise, the output of mines unexpectedly retreated for the first time in six months, falling 1.8 percent.

In terms of market groups, the production of consumer goods declined 0.1 percent as anincrease in consumer durables output is insufficient to compensate for a larger decrease in nondurable output. Business equipment rose 1.8 percent with appreciable gain in all major component indexes including transit, information processing and industrial equipments. On the contrary, the productions of materials edged down 0.4 percent, with 1.7 percent decrease in energy material that reflected lower output by utilities and reductions in oil and natural gas extraction. 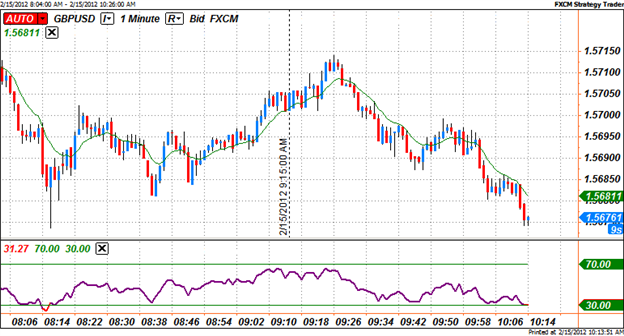 The U.S. dollar regains its footings versus euro, Swiss franc and British pound but trades lower than commodities currencies in early North American trade today. The reserve currency edged higher minutes following the industrial production report. As can be seen from the 1-minute GBPUSD chart above, the GBP/USD dropped 40 pips from 1.5715 to 1.5676 within an hour. The sterling lose ground versus its major trading partners today as the nation’s jobless claim rose more than forecast and unemployment rate was held at highest level in 16 years in the four quarter. At the time this report was written, the British pound traded at $1.5681.