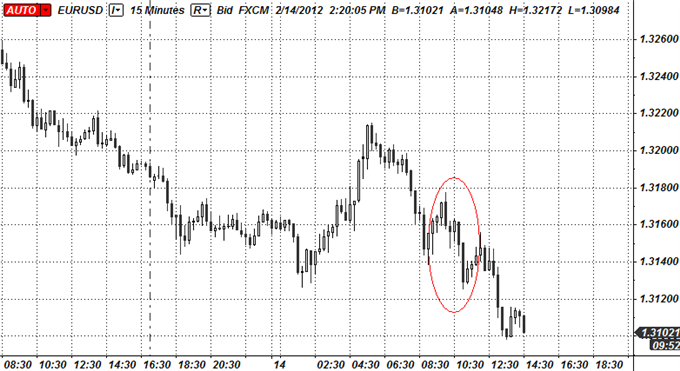 Two days after the Greek government approved €330 billion in austerity cuts amid mass protests, more news crossed the wires that Greek politicians and citizens alike have to be upset about: the latest GDP growth numbers. Going into yesterday, the consensus estimate for fourth quarter GDP was a severe contraction between 5.5 to 6.0 percent. However, the numbers fell short of even that low bar, coming in a full percent below at -7.0 percent for the fourth quarter. The recession in Greece means it will have an even harder time meeting loan payments that are due, the next of which being a €14.5 billion bond redemption on March 20. It seems that, without more money from other Euro-zone states, the Greek government will not be able to make the payment.

The EUR/USD dropped 30-pips immediately after the news release, continuing its downward trajectory that started earlier in the morning. With this latest news, it has become evident that the Greek economy is much worse off than previously feared, raising concerns that even more money will be needed to help the country avoid an almost inevitable default. While Greek leaders are trying to save the country, the citizens of Greece are taking to the streets to voice their disdain for leaders’ handling of the situation. The Greek economy is not expected to expand until late 2013 at the earliest, prompting many to wonder how long the Euro-zone will need to continue to provide money for the debt stricken nation.

Even in the event of a full Greek recovery, debt remains at a very high level compared to GDP, meaning that loan repayments will continue to increase, making it harder for the Greek government to repay on time. The country seems headed into even more dire straits, with little-to-no hope of an economic recovery even close to the one needed to end this crisis. Greece has dug itself into a deep hole and it seems unlikely that any amount of bailout money will drag it out.