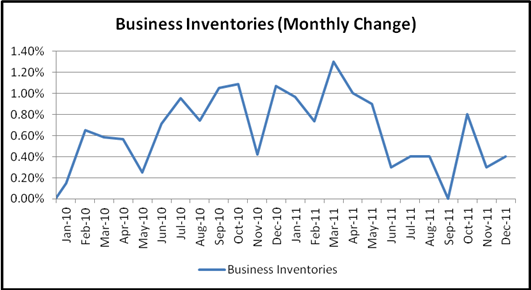 The U.S. business inventories grew for the third consecutive months in December, thus contributing to the expansion in the gross domestic product during the fourth quarter. According to a report issued by the Commerce Department today, manufacturers’ and trade inventories, adjusted for seasonal variations but not for price changes, rose 0.4 percent to $1,555.5 billion in December, following a 0.3 percent gain in November and 0.8 percent gain in October. The print, however, missed consensus forecast of 0.5 percent increase from Bloomberg survey. From twelve months earlier, unsold goods held by business surged 7.7 percent.

Business inventories climbed in December as merchant wholesalers reported considerable gain in stocks. Adjusted wholesale inventories soared 1.0 percent to $473.1 billion. Additionally, manufacturing stockpiles edged up 0.1 percent to $472.3 billion while retail stockpiles increased 0.2 percent to $610.1 billion. Given U.S. job market picking up and the economy expanding at fastest pace, 2.8 percent, in final three months of last year, firms continued to restock shelves and warehouse in prediction of stronger demand in early 2012. Besides, sale advanced 0.7 percent in December, the most since July. As sale moved up at faster pace than inventories, December inventories-to-sale ratio fell to 1.26 from 1.27 in November. 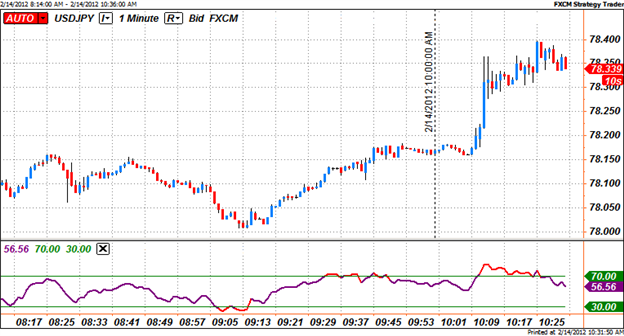 The U.S. dollar gains ground versus most of its major trading partners during North America morning trade amid surge of risk aversion. The one-minute USDJPY chart above showed that the currency pair hiked approximately 25 pips from 78.15 to 78.4 minutes following the inventories and sales report. TheRelative Strength Indicatorcrossingabove 70 after the release signaled that foreign exchange traders were aggressively purchasing the reserve currency while cutting their Japanese yen holdings in their portfolios. At the time this report was written, the dollar traded at 78.39 yen. The yen hit three-month low versus the dollar after the Bank of Japan unexpectedly boosted 10 trillion yen asset purchases today.