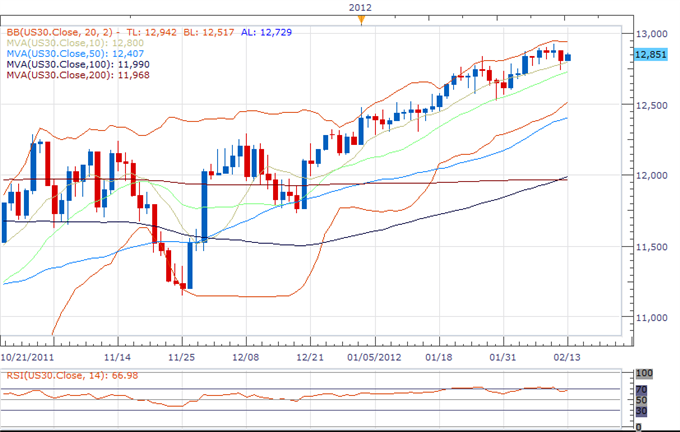 Technical: The market remains very well bid but is starting to show some signs of exhaustion after rolling over in the previous week. The 20-Day SMA is key here and while the price holds above this shorter term moving average, the up-trend will remain intact. However, a break and close below the 20-Day SMA will suggest that the market is ready for a more significant corrective pullback which would further accelerate on a drop back below the previous higher low from January 30 at 12,528.

Fundamental: Against the backdrop of an improved job market and bolstered US bank lending, this past month (January) has turned out to be the best January for the US stock market in 15 years. The hike in equities has directly correlated with more optimistic outlook for the US economy in the face of improving economic data. Market participants are now wondering if Mr. Bernanke and company have been a little too downbeat on their assessment and if a policy reversal may be closer than has been intimated by the Fed. 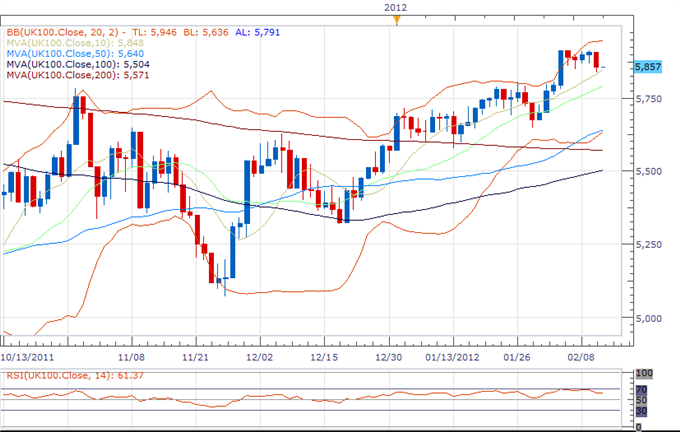 Technical: While the trend in this market remains bullish for the time being, we are starting to see signs of a potential bearish reversal. A closer look at the daily chart shows the trigger of a double top with the break below the neckline by 5,848, opening a measured move objective down by 5780 over the coming sessions. A close back below the 20-Day SMA will be required to accelerate further and expose more significant support by the January 30 previous higher low at 5,649.

Fundamental: The Confederation of British Industry has come out with a statement projecting gains in the UK economy in 2012 as the UK avoids a recession. Indeed, risk sentiment appears to be growing in the UK, which along with the US was the first country to enter the current crisis and may be among the first to emerge. Elsewhere, Scottish investors have started buying shares in US banks, a sign that the UK could join the US in economic recovery. Increased QE from the BoE could be also be contributing to the pickup in sentiment. 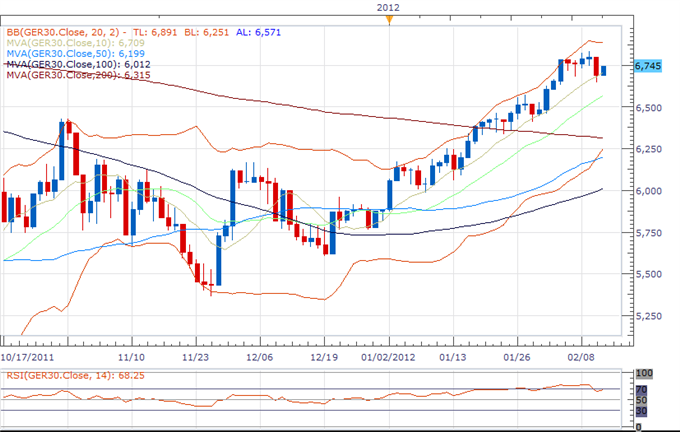 Technical: This market has been very well bid since late 2011 and continues to remain supported on dips towards the 10-day SMA. However technical studies are starting to look a little stretched and we would warn of the possibility for a bearish reversal over the coming sessions. We have not yet seen a daily close below the 10-Day SMA in 2012, and a close below this short-term SMA will likely be the trigger for the anticipated pullback.

Fundamental: DAX has joined European and global risk optimism following the Greek deal. Solid debt auction results out of Germany haven’t hurt either. Moving on, traders are talking about the potential Vodafone acquisition of Cable & Wireless, a deal that could impact markets around Europe. Shares in both companies were higher as a result. 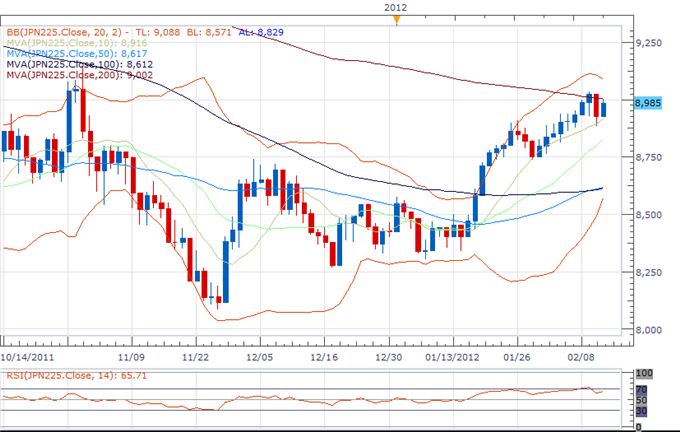 Technical: A strong bearish reversal day from Friday shows the market at risk for a more significant pullback over the coming days with daily studies rolling over from overbought territory. Look for the 200-Day SMA by 9,000 to act as a formidable resistance zone going forward, and only a clear and sustained break back above the longer-term SMA would delay our bearish outlook from here and give reason for pause. As such, any rallies above 9,000 should be used as formidable sell opportunities, with only a break above 9,100 to negate. Back under 8,885 will confirm outlook and accelerate towards 8,750 further down.

Fundamental: Despite the recent greater than expected drop in GDP, Japanese markets have been rallying on Greek optimism. A few significant Japanese companies haven’t been riding the wave though, with Olympus Corp projecting an annual loss of 32 billion yen ($412 million), worse than analyst estimates. Also, Tokyo Electric Power Co. widened its 2012 loss forecast as compensation and clean-up costs rose after the Fukushima nuclear disaster. 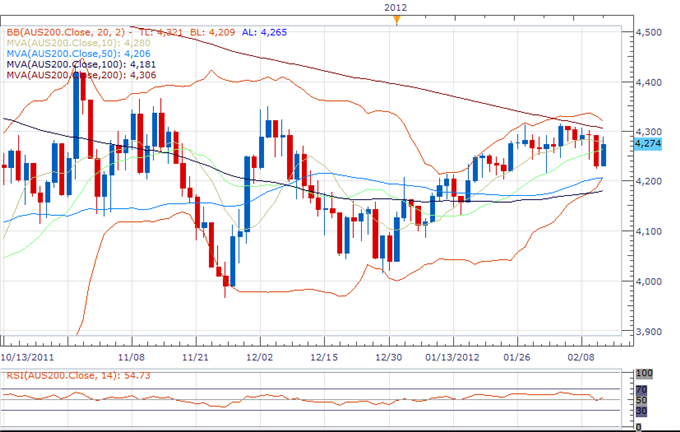 Fundamental:We’ve seen some solid development out of Australia recently with the RBA’s decision to hold rates steady surprising many. However, the economy continues to suffer from weakness in correlated Asian markets with the Aussie telecommunication sector taking a hit from Singapore Telecommunications report of a 9.6 percent fall in third-quarter earnings. Elsewhere, Australia & New Zealand Banking Group, has released a plan to eliminate about 1,000 jobs. The Aussie banking sector has been hit hard by a slump in lending growth.