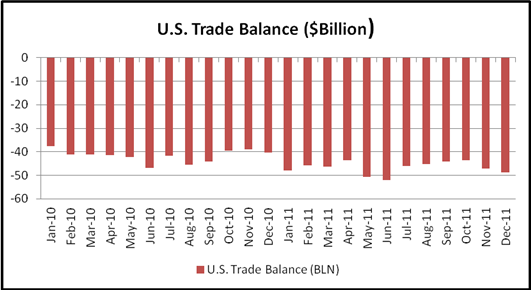 The report issued by the Commerce Department today showed that trade deficit unexpectedly rose to $48.8 billion in December, the highest level in six months. The print is close to consensus forecast of a deficit of $48.5 billion, according to the Bloomberg survey. November deficit was revised lower to $47.1 billion from $47.8 billion initially reported. From a year prior, goods and services deficit gained $8.3 billion, with exports up 9.0 percent to $14.8 billion and imports up 11.3 percent to $23.1 billion.

For the full year, the total goods and services deficit was $558.0 billion in 2011, $58.0 billion up from $500 billion in 2010. As such, 2011 trade deficit was corresponding to 3.7 percent of U.S. gross domestic product compared to 3.4 percent in 2010. U.S. officials recently expressed their concerns that possible European recession would trigger the notably decline in U.S. exports to Europe, thus widening the U.S. trade gap this year. 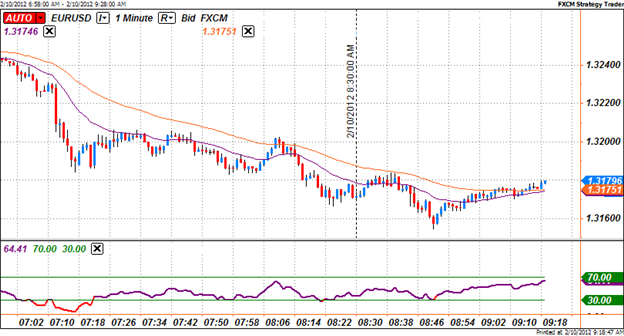 The U.S. dollar gained its footings versus most of its major trading partners during an overnight trade amid surge of risk aversion as investors diversified away from the euro and risk-correlated assets after euro-zone ministers postponed approval for the second bailout package to Greece. However, market participants showed fairly muted reactions following the U.S. trade balance report. As can be seen from 1-minute EUR/USD chart above, the currency pair traded within a tight range between 1.3160 and 1.3180 after U.S. trade balance was reported to hit 6-month high. The Relative Strength Indicator (RSI) lying between 30- and 70-level indicated neither overbought nor oversold reaction regarding to the EUR/USD pair. At the time this report was written, a euro trades at $1.31796.