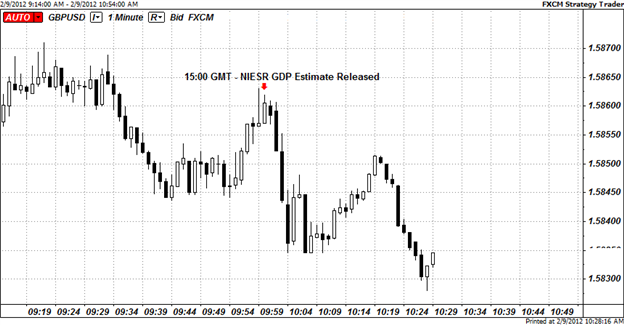 The latest release from the National Institute of Economic and Social Research (NIESR) shows that U.K.’s Gross Domestic Product probably fell by 0.1 percent in the three months to January, compared with a contraction by the same amount in the fourth quarter (revised from previous print of 0.1 percent growth). While the estimates do not confirm that the UK is in recession, they do suggest that there has been no growth since October.

This latest estimate supports the decision that the Bank of England made earlier today to leave its benchmark interest rate at its current low of 0.5 percent, whilst increasing its asset purchase target by £50 billion to £325 billion. The central bank announced a further round of quantitative easing in a bid to increase economic growth in the UK, in acknowledging the significant downside risks that the turmoil in Europe continues to pose to the UK.

NIESR’s estimates for a shrinking U.K. economy saw the British pound fall against the U.S. dollar, with the GBP/USD pair dropping 22 pips to $1.5835 in the minutes following the data release. Despite making a slight recovery, the pound continued to lose ground, declining towards 1.5830 at the time of this report. Combined with recent data that has been less encouraging, these latest figures raise the possibility that the UK may already be in recession. The market will be looking ahead for signs that the latest round of quantitative easing will help stimulate a flagging UK economy.