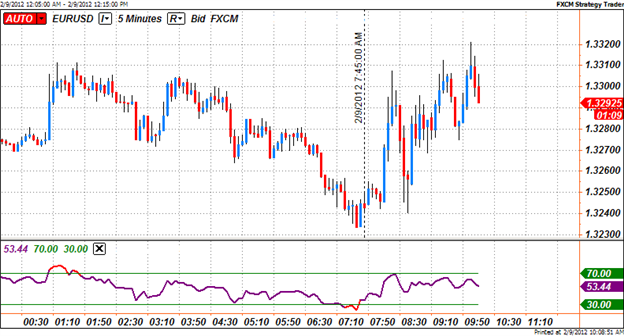 At the European Central Bank meeting today, the Governing Council decided to leave key interest rate unchanged at a historical low of 1.00 percent for two consecutive months after two straight cut in November and December 2011. The ECB’s benchmark rate decision came in with no surprise as it matched with the median projections from a Bloomberg News survey. Of fifty-seven economists surveyed by the Bloomberg News, only two predicted an interest rate cut by at least a 0.25 percent while the rest anticipated no change. Additionally, interest rates on the marginal lending facility and the deposit facility were held at 1.75 percent and 0.25 percent, respectively. While the Greek debt crisis particularly intensified last few months, economic activity in the 17-nation region appeared “very weak” in the fourth quarter among which German GDP is likely to have shrunk by 0.25 percent. Besides, the inflation rate in Euro area remained steady in January 2012 at 2.7 percent, well above the regional inflation target, though.

In his news conference following the meeting, ECB President Mario Draghi reiterated that the “Euro-area economic outlook still faces downside risks,” but he also expressed his optimistic view that those downside risks no longer are “substantial”. In addition, the inflation outlook remains “broadly balanced” and recent surverys "confirm tentative signs of stabilization." He also revealed that Greek party leaders have reached agreement on austerity measures required to receive the bailout. Should Greece avoid default in March, the Euro-zone can shun the “incalculable” the repercussion of the debt crisis spreading. It’s worth noting that “European Central Bank did not discuss change in interest rate today”. That means the ECB has probably entered “wait-and-see mode” and policy makers have observed the Euro-zone economy stands to recover after a successful Greece debt deal.

The Euro continued to gain its footings versus most of its major counterparts for a second straight day today as Euro optimism reemerges on the Greek debt deal. The single currency extended gains following the ECB rate decision and ECB President Draghi’s comments at the news conference. As can be seen from the 5-minute EUR/USD chart above, the currency pair immediately jumped about 90-pips from 1.3230 to 1.3320 within an hour. At the time this report was written, the EUR/USD strengthened 0.34 percent versus the greenback, trading at $1.3293.