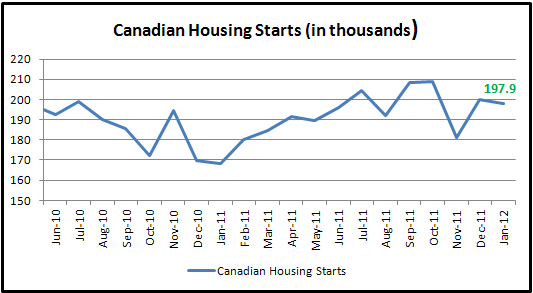 Canadian housing starts unexpectedly retreated in the first month of 2012 as a result of considerable decline in urban single units and slowdown in multiples. The seasonally adjusted annual rate of starts decline 1 percent to 197,900 units in January from 199,900 units a month earlier, Canada Mortgage and Housing Corp. reported today. The print, however, topped consensus estimates as nineteen economists surveyed by Bloomberg News had predicted a bigger drop to 194,000. December’s reading was downwardly revised to 199,900 from 200,200 initially reported. From a year earlier, Canadian dwelling starts increased 18.3 percent in January 2012 compared to a gain of 20.6 percent in December 2011.

Canadian dwelling starts declined less than estimated in January as improvement in housing construction in rural areas offset deterioration in urban areas. Housing starts in rural areas surprisingly surged 16.4 percent to 21,300 last month in contrast to previous 10.3 percent fall to 18,300 in December. On the other hand, starts in metropolitan regions disappointingly fell 2.8 percent to 176,600 in January after rising 9.9 percent to 181,600 in December. The fall was entirely triggered by 7.8 percent decline in single –family starts. Meanwhile, urban multiples, the most volatile component, modestly gained 0.4 percent to 111,700 following to 14.4 percent rise in the prior month. On the regional basis, British Columbia and Ontario reported the strongest increase in starts, 28.0 percent and 11.1 percent, respectively. In contrast, Atlantic Canada and Quebec registered the biggest slump, 35.4 percent and 34.4 percent, respectively. 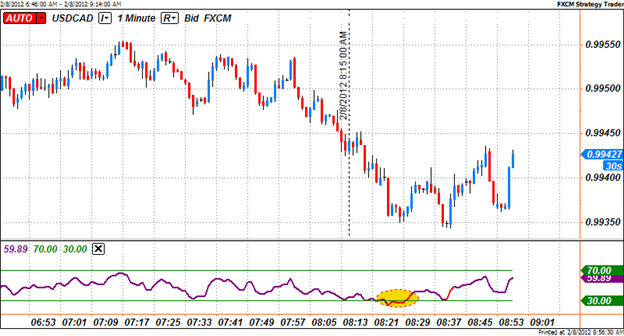 Canadian dollar gains ground versus safe-haven currencies ( U.S. dollar, Japanese Yen and Swiss franc) but loses its footing against high-yielding currencies (Australian dollar and New Zealand dollar) ahead of the North American trade today as appetite for risk continued to rise on hope that Greece will agree austerity measures required to get bailout package. Besides, Australian unexpected held interest rate at 4.25 percent amid of consensus forecast of a cut of 25 basis points, sending the aussie higher than most of its trading partners.

As can be seen from 1-minute USD/CAD chart above, the currency pair followed a choppy pattern after the Canadian housing starts report. The USD/CAD trades within a tight range between 0.9935 and 0.9945. At the time this report was written, the dollar trades at C$0.9943.