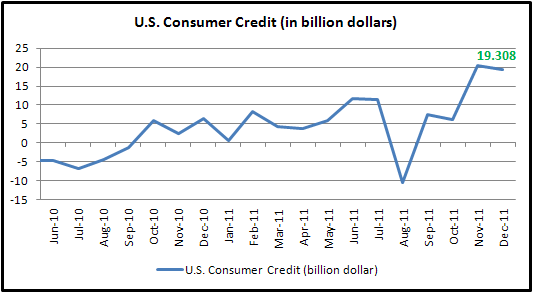 U.S. consumer debt unexpectedly climbed for the fourth straight month in December, a positive signal of increasing demand and willingness to spend that fosters growth in the world’s largest economy. The Federal Reserve report today showed that the total of all consumer credit outstanding grew a little softer 19.308 billion, or 9.3 percent at annual rate, in December after surging to a decade-high of $20.375 billion in November. The print also topped consensus forecast as thirty-seven economists surveyed by Bloomberg News had predicted a modest rise of $7 billion. Projections were fairly divergent, ranging from a fall of $8 billion to a gain of $15 billion.

Consumer credit climbed more than forecast in December as both type of credit, revolving and non-revolving, significantly jumped. Revolving credit, which mostly measures credit card use, edged up 4.1 percent at annual rate to $801 billion in December from $798.2 billion in the prior month. Spending on credit cards grew for the second straight month as consumers continued to use credit cards more to purchase goods and gifts for holiday seasons. Besides, since some of big banks imposed new fees on debit card use, more debit-card owners switched to credit card to avoid those fees. Meanwhile, non-revolving credit, including student loans, car loans and loans for mobile homes, advanced 11.8 percent at annual rate to $1697.3 billion in the month from $1680.8 billion in November. Improving labor market condition coupled with increasing pay rate boosted demand on autos. Auto sector posted another strong month for car sales, with 14.1 million annual rate cars sold last month. Also, demand on student loans increased as more Americans go back to school. 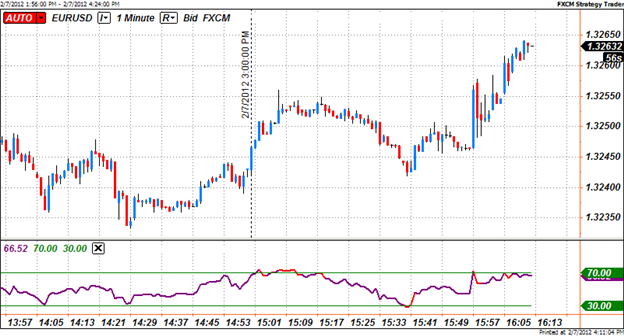 The greenback loses grounds versus most of its major counterparts except its Japanese trading partner during North American trading partners today amid surge of risk appetite on Greek deal optimism. Meanwhile, a rumor that Greece was drafting a list of painful reforms needed to get a new bailout package helped boost the euro to eight-week peak. As can be seen from the 1-minute EUR/USD chart above, the currency pair jumped about 40 pips from 1.324 to 1.3263 despite of stronger-than-expected consumer credit report. The Relative Strength Indicator crossing above the 70-level indicated that currency traders was massive selling the dollar in favor of the single currency. At the time this report was written, the single currency strengthens 1.07 percent versus the reserve currency, trades at $1.3263.