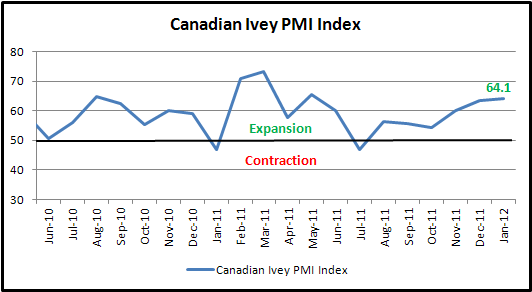 Canadian Ivey Purchasing Managers Index (PMI)surprisingly hit eight-month high in the first month of 2012, demonstrating faster pace of purchasing activity in the Canadian economy. The Purchasing Management Association of Canada and the Richard Ivey School of Business jointly reported today that the Ivey PMI, a leading indicator used to predict future trends, climbs to 64.1 on a seasonally adjusted basis in January 2012 from 63.5 in December 2011. Meanwhile, the corresponding figure for January 2011 was 46.8 and for January 2010 was 57.4. The print also topped consensus forecast of 59.7 from Bloomberg News survey.

January Ivey Purchasing Index came in well above median forecasts due to rising employment, inventories and prices in the month compared with previous month. Ivey Employment Index for January stood at 55.2, indicating improvement in the labor market. Figures over 50 indicate expansion; otherwise values under 50 signify contraction. Inventories trends higher in January than the previous month as the Ivey Inventories Index printed at 57.0. Inevitably, a more robust recovery in the U.S economy recently fosters its neighbor Canada’s manufacturing and export industry. Besides, price pressure continued to rise as a result of persistent strength of Canadian dollar. Prices Index stands at 65.0 compared with 67.7 in December and 68.1 in November. In contrast, Ivey Supplier Deliveries Index dropped to 41.9 from 46.4 in the previous month, signaling that deliveries were slower in January than December. 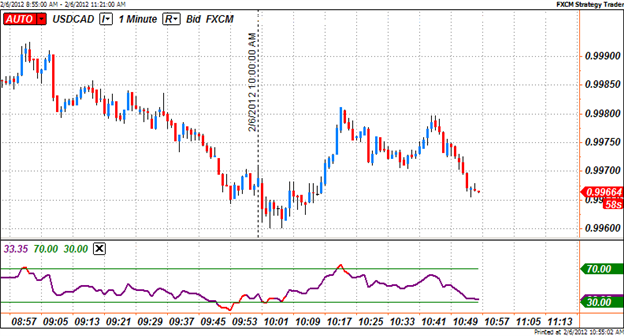 Canadian dollar traded mixed in early North American trading session today since the loonie strengthened versus high-yielding currencies (Australian dollar and New Zealand dollar) but weakened versus safe-haven currencies (U.S. dollar and Japanese yen) amid renewed worries about Greek default. As can be seen from the 1-minute USD/CAD chart above, the loonie resumed loss versus the reserve currency fifteen minutes after the Canada Ivey PMI report released. The USD/CAD pair hike about 20 pips from 0.9960 to 0.9980. Regardless, Canadian dollar saw correction after one hour as the pair fell down again to 0.9967 – a level before the Ivey PMI report issued.