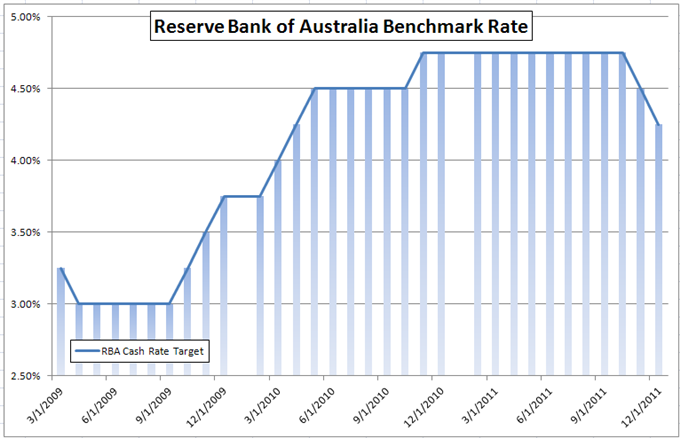 With the private sector agreement between banks and the Greek government still in the balance, the Greek government made some progress this weekend on their budget for 2012, further opening the door for the release of the next tranche of bailout funds. Although expectations were for leaders on both sides to agree on both a budget and debt agreement this weekend, official reports state that negotiations on Greek sovereigns and other parts of this year’s budget will continue into this week.

Risk correlated currencies saw early pressure this morning as central bank rate decisions and commentary highlight this week’s economic calendar. Australia’s central bank, the Reserve Bank of Australia, is expected to cut rates for the fourth time consecutively since October 2011, lowering the cash target by 25 basis points to 4.00%. Even though 4Q 2011 core inflation was higher than expected, continued uncertainties from the European and Asian markets are expected to weigh against a too-tight monetary policy.

The Bank of England is also expected to increase its quantitative easing purchases from a target of GBP 275 billion to GBP 325 billion per month, with Governor Mervyn King previously citing continued weakness in the local economy. The European Central Bank is expected to hold rates steady at 1.00%, although further commentary from President Mario Draghi is expected to drive the Euro.

At the time of writing, early illiquid markets are trending towards risk aversion, with the Australian dollar losing around 0.400% against the US dollar, and the Euro down about 0.350% against the buck. The Japanese yen is currently the only gainer, moderately stronger by 0.040% against the dollar.