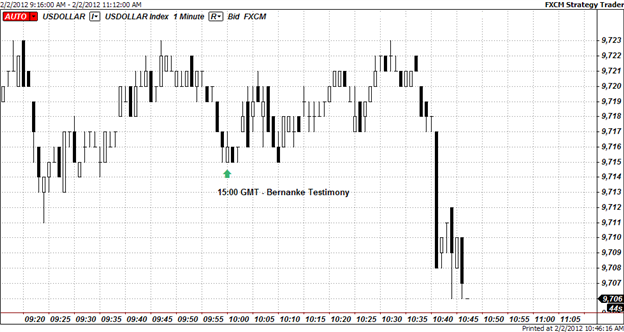 Federal Reserve Chairman Ben Bernanke testified before the House Budget Committee on the U.S. economic outlook today. The appearance comes just a week after the Fed’s announcement that it is likely to keep interest rates near zero until at least late 2014, extending its previous time frame by at least a year and a half.

At the testimony, Bernanke began by defended the FOMC’s decision to maintain its highly accommodative stance of monetary policy and to maintain its program to extend the average maturity of its securities holdings. Bernanke reiterated a bearish tone on the U.S. economic recovery, describing the pace of recovery as “frustratingly slow”, although the Fed is indicating that expect a somewhat stronger growth this year than in 2011.

Moving onto fiscal policy challenges, Bernanke warned against overly rapid deficit cutting, appealing to lawmakers that “even as fiscal policymakers address the urgent issues of fiscal sustainability, they should take care not to unnecessarily impede the current economic recovery. Fortunately, the two goals of achieving long-term fiscal sustainability and avoiding additional fiscal headwinds for the current recovery are fully compatible--indeed, they are mutually reinforcing.” Even after economic conditions have returned to normal, the Fed cautioned that the nation will still face a sizable structural budget gap if current budget policies continue. Even assuming that the economy is close to full employment, the Fed anticipates that the budget deficit would be more than 4 percent of GDP in fiscal year 2017.

Immediately after the release of Bernanke’s testimony, the U.S. dollar pared back recent losses, with the U.S. Dollar Index (Ticker: USDOLLAR) reaching 9723 before tumbling down towards 9706 at the time of this report. The U.S. dollar fell against major currencies including the euro, Australian dollar and Canadian dollar.

The U.S. dollar declined sharply as the markets viewed the FOMC’s announcement as “dovish”, allowing a third round of quantitative easing to remain on the table for some time this year.

In his testimony, Bernanke noted the following outlook on the U.S. economy and fiscal policy challenges:

Having a large and increasing level of government debt relative to national income runs the risk of serious economic consequences. Over the longer term, the current trajectory of federal debt threatens to crowd out private capital formation and thus reduce productivity growth. To the extent that increasing debt is financed by borrowing from abroad, a growing share of our future income would be devoted to interest payments on foreign-held federal debt. High levels of debt also impair the ability of policymakers to respond effectively to future economic shocks and other adverse events.

Even the prospect of unsustainable deficits has costs, including an increased possibility of a sudden fiscal crisis. As we have seen in a number of countries recently, interest rates can soar quickly if investors lose confidence in the ability of a government to manage its fiscal policy. Although historical experience and economic theory do not indicate the exact threshold at which the perceived risks associated with the U.S. public debt would increase markedly, we can be sure that, without corrective action, our fiscal trajectory will move the nation ever closer to that point.

To achieve economic and financial stability, U.S. fiscal policy must be placed on a sustainable path that ensures that debt relative to national income is at least stable or, preferably, declining over time. Attaining this goal should be a top priority.

Even as fiscal policymakers address the urgent issue of fiscal sustainability, they should take care not to unnecessarily impede the current economic recovery. Fortunately, the two goals of achieving long-term fiscal sustainability and avoiding additional fiscal headwinds for the current recovery are fully compatible--indeed, they are mutually reinforcing. On the one hand, a more robust recovery will lead to lower deficits and debt in coming years. On the other hand, a plan that clearly and credibly puts fiscal policy on a path to sustainability could help keep longer-term interest rates low and improve household and business confidence, thereby supporting improved economic performance today.

Fiscal policymakers can also promote stronger economic performance in the medium term through the careful design of tax policies and spending programs. To the fullest extent possible, our nation's tax and spending policies should increase incentives to work and save, encourage investments in the skills of our workforce, stimulate private capital formation, promote research and development, and provide necessary public infrastructure. Although we cannot expect our economy to grow its way out of our fiscal imbalances, a more productive economy will ease the tradeoffs that we face and increase the likelihood that we leave a healthy economy to our children and grandchildren.