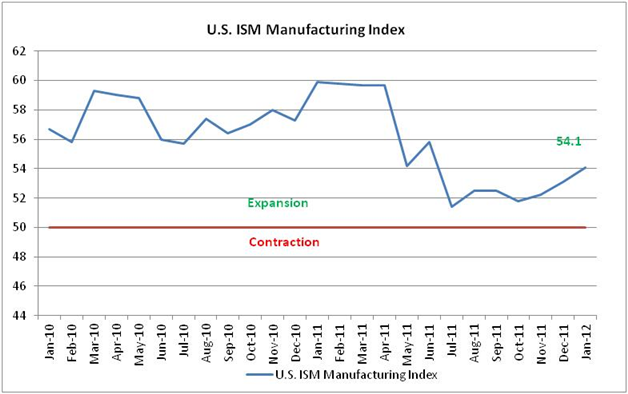 Expansion in manufacturing in the U.S. hit a seven-month high in January, led by gains in new orders, production and employment. The Institute for Supply Management’s (ISM) manufacturing index, which tracks the amount of manufacturing activity that occurred in the previous month, climbed to 54.1 percent, an increase of 1 percent from December’s reading of 53.1 percent. This reading falls short of the median forecast according to a Bloomberg News survey, which predicted a print of 54.5 percent. The index has stayed above the 50-level for 30 straight months, signifying consistent expansion in the manufacturing sector. According to ISM’s January report, the PMI of 54.1 percent for January corresponds to a 3.9 percent increase in real gross domestic product (GDP) on an annualized basis.

The ISM manufacturing index takes into account expectations for future production, new orders, inventories and employment deliveries. New orders rose to 57.6 percent from December’s reading of 54.8 percent, led by petroleum and coal products, machinery, apparel and primary metals. Expansion in production slowed to 55.7 from 58.9 percent in December, as did employment which came in at 54.3 percent, a 0.5 percent slow-down from December’s figure of 54.8 percent. Meanwhile, inventories contracted a slower pace than in December, coming in at 49.5 percent.

ISM Prices Paid index, which reflects business sentiment regarding future inflation, came in at 55.5, well over the consensus forecast of 50.0 and 8 percentage points higher than the December reading of 47.5. This is the first month that the Prices Index has exceeded the 50-level since September 2011. Of the eighteen manufacturing industries, eleven, including textiles, fabricated metal products, and plastics, reported paying increased prices. Four industries that reported paying lower prices included furniture, petroleum and coal, food/beverage/tobacco and machinery. 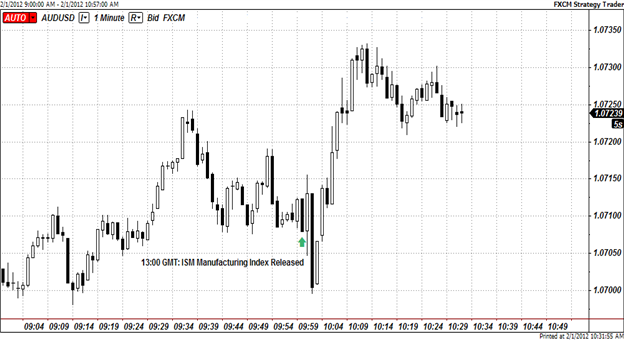 In the minutes after the data release, the U.S. dollar lost ground against other major currencies, extending the decline from earlier this week as the rise in risk appetite dampens the appeal of the greenback. It is worth noting, however, that the increase in the ISM survey could dampen expectations for further monetary easing.