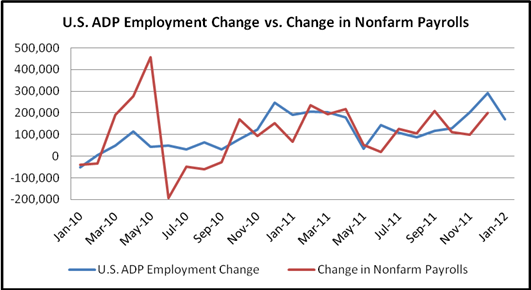 Job creation in the private sector reduced pace in the first month of 2012 after hitting the record high in December, suggesting that improvement in labor market in last few months was due to seasonal factors and struggles to persist. The monthly ADP National Employment report issued today showed that U.S. companies hired 170 thousand workers more in January after adding 292 thousand in December and 209 thousand in November. The print missed a median forecast from Bloomberg survey as forty economists predicted for a bigger gain of 182 thousand. December’s reading was downwardly revised to a gain of 292 thousand from 325 thousand initially reported. As the ADP employment change is considered a precursor to the non-farm payrolls number, a less-than-estimated number today signaled that non-farm payrolls reading released this Friday might miss expectations as well.

Almost private firms reported gain in their payrolls in January 2012, at lower pace compared with the last two months in 2011, though. Service producers generated 152 thousand jobs, following 241 jobs added in December and 181 jobs created in November. Also, employment in both manufacturing and good-producing sectors grew modestly in January. Factories added 10 thousand jobs, equal to a half of job creation number in the previous month. Meanwhile, goods producers hired 18 thousand employees more in January, about a third of the number added in December, 2011. 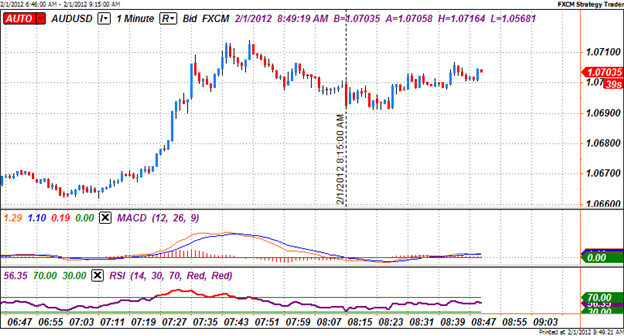 The U.S. dollar falls versus most of its major counterparts amid surge of risk appetite during overnight trade. Foreign exchange traders showed a fairly muted reaction despite ADP number came in worse-than-expected. As can be seen from 1-minute AUD/USD chart above, the reserve currency still traded lower than its Australian trading partner and within a narrow range from 1.0690 to 1.0710 after the ADP report. TheRelative Strength Indicatorlying between 30- and 70-level indicated neither overbought nor oversold regarding to the AUD/USD pair. Market participants have kept their eyes to the nonfarm payroll data and unemployment rate released this Friday to have better assessment about the U.S. job market condition. Unemployment rate fell to 8.5 percent in December of 2011, the lowest level in more than two years and a half. Economists projected that 145 thousand nonfarm payrolls added in January will help maintain the unemployment rate at 8.5 percent.