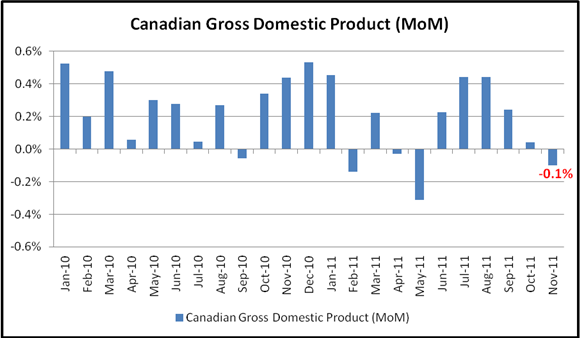 Canada's Economy Contracted in November; USD/CAD Gain to be Short-lived

Canadian economy unexpectedly shrank for the first time in six months in November, led by considerable decline in energy extraction. Statistics Canada reported today thatgross domestic productfell 0.1 percent in November after stalling in October and modestly expanding 0.2 percent in September. The reading missed consensus forecast as 23 economists polled by Bloomberg survey had called for an expansion of 0.2 percent. From a year prior, Canadian gross domestic product edged up 2.0 percent in November compared with 2.7 percent in October and 3.0 percent in September.

The Canadian economy shifted into a reverse gear in November as gain in manufacturing output was insufficient to offset significant fall in oil and gas extraction. Extraction of oil and natural gas dropped 2.5 percent in the month as a result of crude petroleum maintenance shutdown and lower demand from overseas. In contrast, manufacturing output continued to rise 0.6 percent, the third straight month advance in the row, mainly due to 0.9 percent surge in the production of durable goods and 0.1 percent increase in non-durable goods. Besides, output in service-producing sectors increased 0.1 percent, in which retail sales continue to grow for the fourth straight month (+ 0.6 percent) while wholesale trade retreated (-0.6%) on lower wholesaling of miscellaneous products. In addition, finance and insurance sector posted a 0.4 percent decline in light of lower volume of trading on the stock exchanges and lower sales of mutual funds. 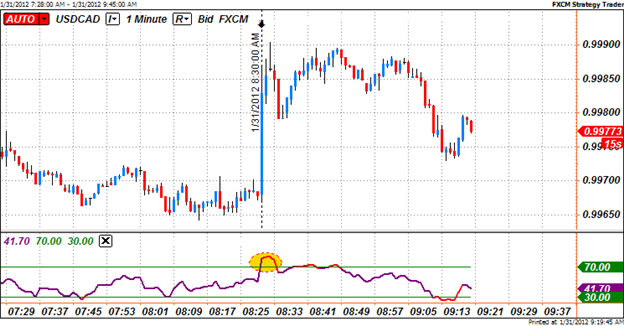 Commodity-linked currencies, including Australian dollar, New Zealand dollar and Canadian dollar, surges versus safe-haven currencies ahead of the North American trade today amid hopes that new fiscal pact for the EU will help address prolonged sovereign debt crisis and restore investor confidence. Regardless, the loonie pares gain after Canadian gross domestic product released at 8:30 Eastern Time came in weaker-than-expected. As can be seen from the 1-minute USDCAD chart above, the USD/CAD immediately hiked more than 20 pips from 0.9970 to 0.9990 five minutes following Canada’s GDP report. TheRelative Strength Indicatorcrossing above 70-level, an overbought territory, also indicated that market participants massively purchasing the reserve currency. However, the initial reaction was corrected after sixty minutes as the loonie resumed its advance versus the greenback. At the time this report was written the Canadian dollar appreciates 0.3 percent against the dollar, trades at $0.9977 in Toronto.