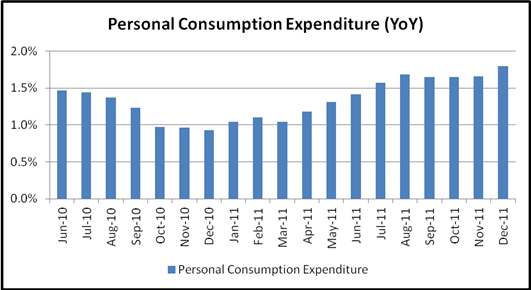 U.S. real personal consumption expenditures (PCE), a primary measure of consumer spending on goods and services, declined $2.0 billion, or 0.1 percent in the last month of 2011, in contrast to an increase of $11.4 billion in November, the Commerce Department reported today. Regardless, the PCE core, which excludes the more volatile components of food and energy, advanced 0.2 percent, topping consensus forecast of 0.1 percent increase. From a year prior, the PCE core climbed 1.8 percent in December in line with expectations. Meanwhile, personal income grew $61.3 billion, or 0.5 percent, in December, following a 0.1 percent pickup in November. 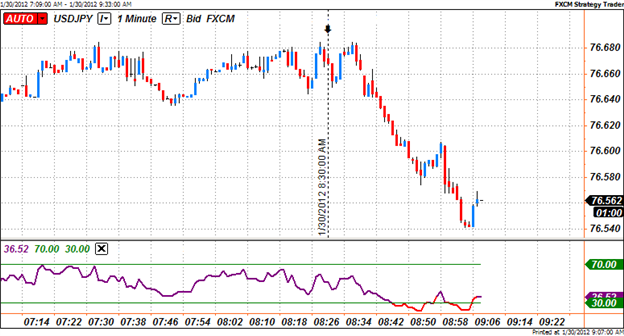 The U.S. dollar strengthens against most of it major peers except its Japanese trading partners ahead of the North American trading session today as investor scaled back their appetite for risk before EU’s leader summit. The dollar appreciated more than 0.9 percent versus high-yielding currencies but depreciated about 0.3 percent versus the yen. As can be seen from the 1-minute USD/JPY chart above, the reserve currency rapidly dropped about 14 pips versus the Japanese Yen following the personal income and spending report. The Relative Strength Indicator falling below 30 twice indicated that market participants preferred purchasing the yen to the dollar. At the time this report was written, the dollar traded at 76.56 Japanese yen.