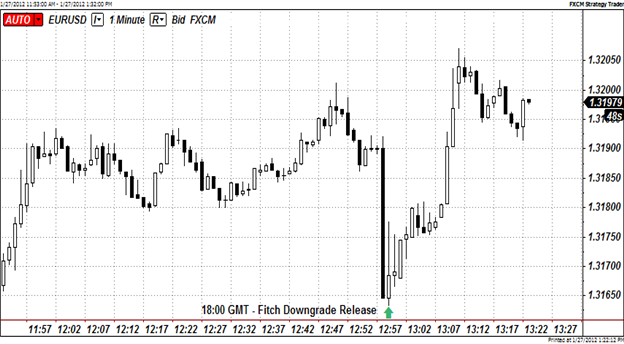 Despite the sovereign credit downgrades, the Euro remained to climb against the U.S. dollar. The U.S. dollar remains weak, as investors continue to await news on a Greek deal being reached.

The ratings actions on the long-term (LT) and short-term (ST) Issuer Default Ratings (IDRs) are as follows:

In the release, Fitch noted the following rationale for today’s downgrades:

As outlined in its rating review press release of 16 December 2011, Fitch has now considered both systemic and country-specific factors for these six sovereigns. As a result, the agency has reduced the score it assigns to capture financing flexibility in its assessment of the credit profiles of eurozone sovereigns that have large fiscal financing needs and significant financial/economic imbalances.

Moreover, rising "home bias" in the allocation of capital, the divergence in monetary and credit conditions across the eurozone, and near-term economic outlook highlight the greater vulnerability to monetary as well as financing shocks faced by these sovereign governments. Consequently, these sovereigns do not, in Fitch's view, accrue the full benefits of the euro's reserve currency status. The net impact of this revision under Fitch's sovereign rating methodology is to lower the long-term ratings of the affected sovereigns by one notch.

Overall, today's rating actions balance the marked deterioration in the economic outlook with both the substantive policy initiatives at the national level to address macro-financial and fiscal imbalances, and the initial success of the ECB's three-year Long-Term Refinancing Operation in easing near-term sovereign and bank funding pressures. Nonetheless, the intensification of the eurozone crisis in the latter half of last year undermined the effectiveness of ECB monetary policy and highlighted the financing risks faced by eurozone sovereign governments in the absence of a credible financial firewall against contagion and self-fulfilling liquidity crises.

The Negative Outlooks on eight eurozone countries (the six sovereigns in this review along with 'AAA'-rated France and 'BB+'-rated Portugal) primarily reflect the risk that the crisis could intensify further. A deeper and more prolonged economic recession than currently anticipated would undermine political support for, and public acceptance of, fiscal austerity and structural reform. It would also have the potential to weaken the commitment of the economically and fiscally strongest eurozone countries, and the ECB, to providing necessary support to eurozone peers.

Fitch currently views that the sovereign credit profiles of the remaining eurozone sovereign governments (with the exception of 'CCC'-rated Greece, which has no Outlook assigned) continue to warrant Stable Outlooks, though each will be subject to active review through the course of the year. Fitch will consider on a country-by-country basis the extent to which the risks associated with the crisis, as well as the limitations on monetary and financial flexibility within the eurozone revealed by the crisis, may impact their long-term sovereign credit profiles.