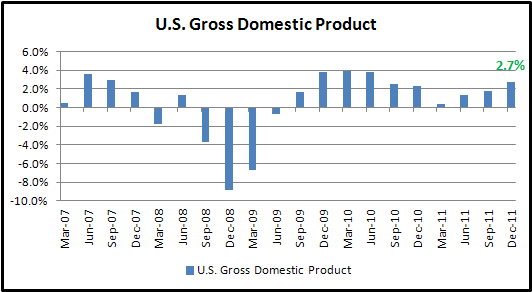 U.S. economy accelerated in the final three months of 2011, pointing to a robust recovery in the world’s largest economy. The “advance” estimate released by the Bureau of Economic Analysis showed that real Gross Domestic Product grew at annual pace of 2.8 percent in the fourth quarter of 2011, following a 1.8 percent increase in the previous quarter. However, the print missed consensus forecast of 3 percent from Bloomberg News survey. Besides, the price index for gross domestic product purchases, a gauge of prices paid by U.S. residents surged 0.8 percent in the fourth quarter compared with a gain of 2.0 percent in the third.

U.S. economy expanded at the fastest pace in more than a year and a half in the fourth quarter on positive contributions from private inventory investment, personal consumption expenditures (PCE), exports, residential and nonresidential fixed investment. Improved employment situation in last few months of 2011, with nonfarm payrolls climbing to the record and unemployment falling to 8.5 percent- the lowest level since February 2009, helps boost consumer spending which accounts for about 70 percent of the economy. Real personal consumption expenditures edged up 2.0 percent in the fourth quarter, following a 1.7 percent increase in the third. Durable goods surprisingly jumped 14.8 percent while nondurable goods increased 1.7 percent. Real exports of goods and services rose 4.7 percent while imports advanced 4.4 percent. Change in real private inventory contributed 1.94 percent to the fourth-quarter change in real GDP after subtracting 1.35 percent in the previous quarter. 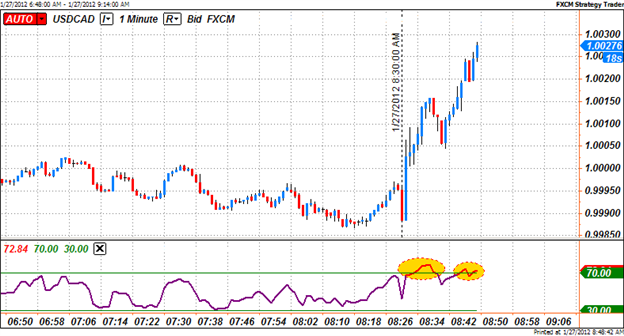 U.S. dollar weakened versus most of its major trading partners in the overnight trade. Regardless, the reserve currency immediately gained its footing following the strong GDP report. It is evident that faster pace of growth in the fourth quarter sparked bullish reaction on the green back since a more robust recovery dampened the prospects for more fund injection to the world’s largest economy. As can be seen from the 1-minute USD/CAD chart above, the U.S. dollar traded below parity versus the loonie before the GDP report released. However, the greenback immediately jumped approximately 40 pips from 0.9990 to 1.0030 twenty minutes after the relase. The Relative Strength Indicator crossing above 70-level, an overbought territory, indicated that forex trading crowed was aggressively purchasing dollar while reducing loonie holdings in their portfolios. At the time this report was written, the U.S. dollar traded above parity at $C1.00276.