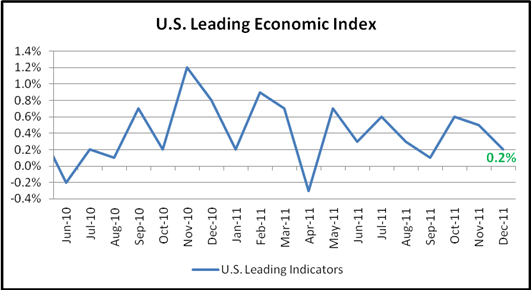 The U.S. Leading Economic Indicator, a gauge of the economic outlook for the next three to six months, advanced 0.4 percent in December, following a revised 0.2 percent gain in November and 0.6 percent rise in October, the Conference Board reported today. The reading missed median projections of a 0.7 percent gain from 44 economists surveyed by the Bloomberg News.

Eight of ten components made up an increase in the December leading index, led by gain in interest rate spread and improvement in labor market conditions. Interest rate spread rose 0.2 percent in the month that continued its upward trend since the Federal Reserve launched its “Operation Twist” program in September. In the FOMC meeting yesterday, the committee also decided to continue this program that extendsthe average maturity of its Treasury holdings. Jobless claims component improved 0.18 percent and average workweek extended 0.07 percent, reflecting optimism about job market in the months to come. Three components representing for manufacturing climate, including consumer goods orders, ISM new orders and new orders for nondefense capital goods excluding aircraft increased 0.01 percent, 0.04 percent and 0.04 percent, respectively. Stock prices gained for the third straight month, with lower pace of 0.05 percent compared with 0.06 percent in November and 0.11 percent in October, though. It’s obvious that moderate growth in the U.S. economy, intensified sovereign debt crisis in Euro-zone and slow down in emerging countries weigh on market sentiments. Besides, building permits component failed to gain for the first month in three in December after rising 0.15 percent in November and 0.24 percent in October, consistent with Fed’ assessment that “housing sector remains depressed”.

The report released at the same time (10:00 AM Eastern Time) by the U.S. Census Bureau and the Department of Housing and Urban Department also showed that new home sales plunged 2.2 percent at a seasonally adjusted annual rate of 307,000, the first drop in five months. The print came in as a surprise as economists had called for a gain of 1.9 percent to 321,000. The threat of further price declines may discourage Americans in some areas to buy a new home despite of historically low interest rate being kept at least until the end of 2014. New home sales climbed 46.7 percent to 22,000 in the Northeast and advanced 9.0 percent to 73,000 in the West. In contrast, sales dropped 10.1 percent to 160,000 in the South and fell 3.7 percent in the Midwest. 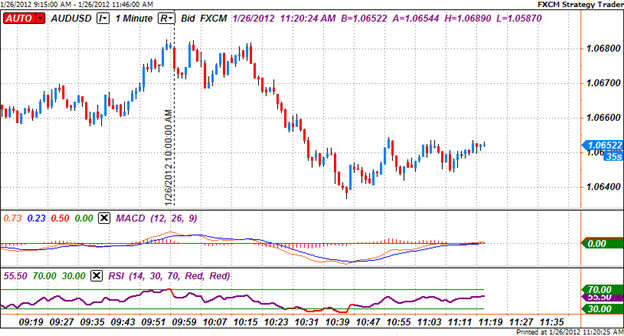 The U.S. dollar continued to weaken versus most of its major trading partners today amid a surge in risk appetite after Fed signaled yesterday that quantitative easing would be still on the table. However, the reserve currency pares loss following the leading indicators and new home sale releases. As can be seen from the 1-minute AUDUSD chart above, the AUD/USD pair dropped approximately 40 pips from 1.0680 to 1.064 within 40 minutes. The Relative Strength Indicator (RSI) falling below 30 indicated that forex trading crowd was massively selling the aussie in favor of the greenback. At the time this report was written, the aussie traded at $1.0652.