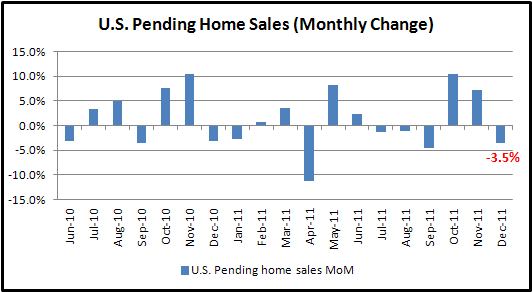 The pending sales of existing homes unexpectedly retreated in December after reaching the highest level in 19 months in November. The Pending Home Sales Index, a forward-looking indicator that tracks home contract signings but the sale has not yet closed, slumped 3.5 percent at a seasonally adjusted rate to 96.6 in December from 100.1 in November, National Association of Realtors reported today. This is the first drop in three months, following 7.3 percent pickup in November and 10.4 percent advance in October. The print missed consensus forecast as economists surveyed by Bloomberg News had predicted a moderate fall of 1 percent. From a year prior, pending home sales rose 4.4 percent compared to 6.9 percent on the previous month.

Pending Home Sales came in worse than expected as three of four regions throughout the United States reported declines in sales. Sales in the West surprisingly tumbled 11 percent in December after soaring 14.9 percent in November. Likewise, sales in the Northeast and the South slipped 3.1 percent and 2.6 percent, respectively. The Midwest is the only region that registered for a gain in home contract signings, 4.0 percent higher than the preceding month and 13.3 percent higher than December 2010. Besides, House Price Index increased 1.0 percent in December, following a revised 0.7 percent fall in November. Inevitably, declining contract activity coupled with rising contract failure pointed to deteriorated level of closed existing home sales in the following two months. 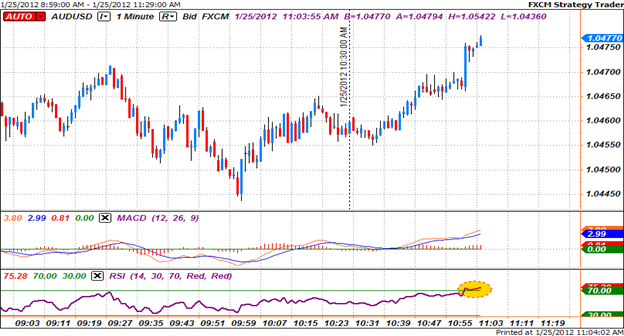 U.S. dollar gains ground versus most of its major trading partners in early North American trading session today as investors scale back their appetite for risk while keeping their close eyes on the FOMC’s rate decision and the latest statement released at 12:30 PM Eastern Time. Regardless, the reserve currency pared gains versus the aussie after pending home sales report disappointed market participants. As can be seen from the 1-minute AUD/USD chart above, the AUD/USD pair climbed approximately 30 pips from 1.0455 to 1.0475 within sixty minutes. The Relative Strength Indicator crossing above the 70-level indicated currency traders’ overbought reactions regarding to the aussie while cutting their dollar holdings. At the time this report was written, one Australian dollar traded at 1.0477 U.S. dollars.

The speculation is rampant over whether Federal Reserve signals another fund injection in its statement to tackle negative effects of intensified European debt woes and stimulate economic growth. An increasing number of market participants anticipated that Fed still leave the door open for more mortgage-backed securities purchase to support the housing market that remained weak compared to pre-crisis level. Another round of quantitative easing (QE3) would inevitably boost multi-asset price, including stocks, oil and gold while weigh on the greenback outlook.