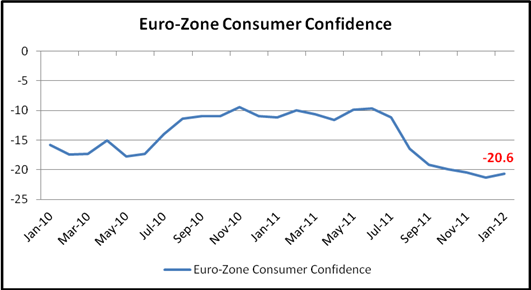 Consumers’ confidence toward seventeen countries that use the euro slightly improved in the first month of 2012 despite of the Standard and Poor’s decision to downgrade credit ratings in 9 countries in the Euro-zone ten days ago. The Brussels-based European Commission reported today that the flash consumer confidence indicator in single-currency area increased to -20.6 in January from a revised -21.3 in December. The print exceeded median forecast of -21.4 from Bloomberg survey. Besides, the flash estimate of the consumer confidence indicator in the European Union also rose to -20.6 from -22.1 in December 2011. The improvement in consumer confidence might be derived from the past two-week stabilization in financial market and recently easing inflationary pressures.

Meanwhile, the economic sentiment indicator (ESI) fell 0.8 points in the EU and 0.5 points in the euro area to 92.0 and 93.3, respectively. The decline in the EU was triggered by deteriorating confidence in services, construction and among consumers while improvement in retail trade prevented the overall indicator from slipping further. Meanwhile, in the euro area, sentiment worsened in services, retail trade and among consumers while confidence in industry and construction remained broadly stable. 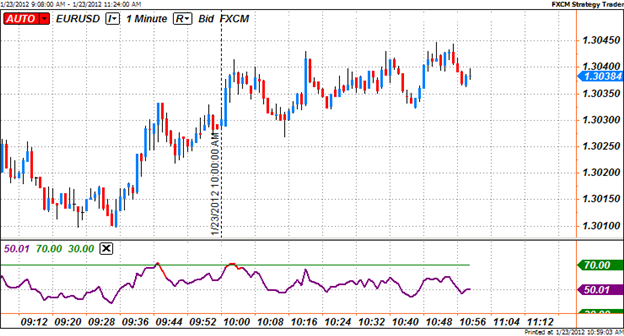 The Euro strengthens most of its major peers except its Swiss Franc trading partner in the North America morning trading session today on positive result from the negotiation between Greece and its private creditors. As can be seen from the 1-minute EURUSD chart above, the euro extended gains to two-week high versus the greenback after the Eurozone consumer confidence indicator came in better than estimated. The EUR/USD pair hiked approximately 25 pips from 1.3030 to 1.3045 within forty minutes following the consumer confidence report. At the time this report was written, one euro traded at $1.3038.