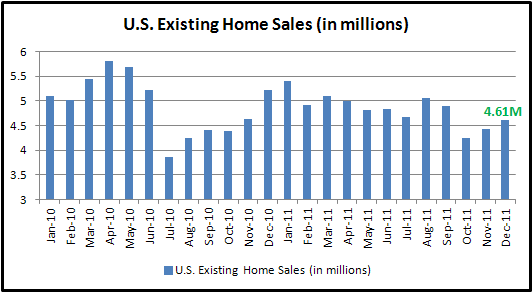 Sales of previously-owned homes accelerated for the third straight month in December as record-low mortgage interest rates, job growth and bargain home prices encouraged more median-income consumers to achieve their homeownership dreams. The National Association of Realtors reported today that existing home sales climbed 5.0 percent to a seasonally adjusted annual rate of 4.61 million in December from the revised 4.39 million in the previous month. The reading, however, missed consensus forecast as economists polled by Bloomberg survey had predicted a print of 4.65 million. November figure was downwardly revised to 4.39 million from 4.42 million initially reported.

Existing home sales recovered at faster pace in December as all of four regions throughout the United States reported gains in number of contracts to purchase previously owned dwellings. The Northeast registered the largest percentage gain of 10.7 percent to an annual pace of 620 thousand homes, following a 9.8 percent increase in the preceding month. Meanwhile, the Midwest stated 8.3 percent pickup to 1.04 million, up 3.5 percent from a year ago. Also, sales in the South and the West increased 2.9 percent to 1.76 million and 2.6 percent to 1.19 million, respectively. Besides, single-family home sales edged up 4.6 percent to a seasonally adjusted annual rate of 4.11 million while existing condominium and co-op sales climbed 8.7 percent to 500 thousand. 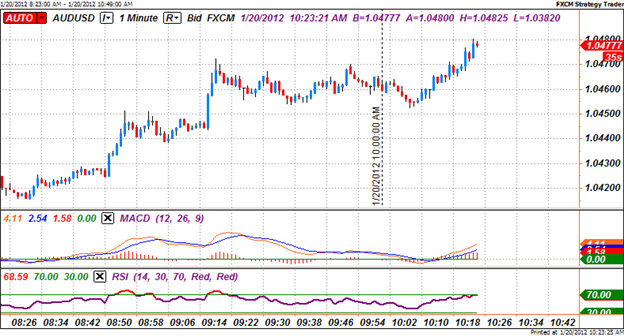 The U.S. dollar weakens versus high-yielding currencies in the North American morning trading session as risk sentiment props up. As can be seen from the 1-minute AUDUSD chart above, the AUD/USD pair temporarily slipped 20 pips from 1.0470 to 1.0450 five minutes before and after the housing report. Regardless, market reactions were quickly corrected after that and the aussie rapidly extended gains versus the greenback. At the time this report was written, one Australian dollar traded at $1.0478. Since the housing market has been improving but still low compared to the pre-recession level, market participants have highly speculated that Fed might purchase more mortgage-backed securities to strengthen the national housing recovery and support economic growth in the intermediate future.