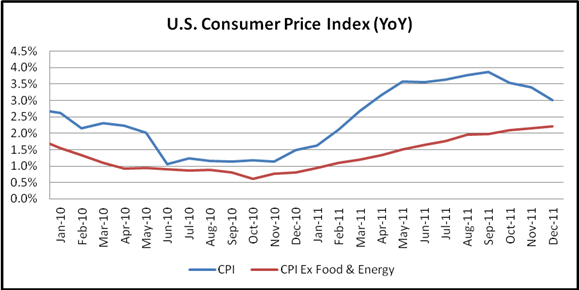 U.S. inflation eased for the second month on lower energy price in December; consistent with Federal Reserve official’s view that outlook for inflation was “pretty good” and might fall below 2 percent in the first half of 2012. The seasonally adjusted consumer price index for all urban consumers remained unchanged in December, the U.S. Bureau of Labor Statistics reported today. The reading missed consensus forecast of 0.1 percent increase, according to Bloomberg News survey. From twelve months earlier, the index edged up 3.0 percent compared to 3.4 percent in the previous month. The less volatile figures, excluding food and energy, rose 0.1 percent on a monthly basis and 2.2 percent on a yearly basis, matching with economists’ expectations. A producer price index report released yesterday also revealed cooling inflationary pressure on the U.S. production line in the last month of year 2011.

The Consumer Price Index came in flat in December as decline in energy price offset increases in other goods and services costs. The gasoline index fell for the third consecutive month in December, as did household energy index. Specifically, gasoline price plunged 2.0 percent while fuel oil dropped 1.0 percent. In contrast, food prices moderately rose 0.2 percent in December after moving up 0.1 percent in November and October. Besides, the index for all items less food and energy increased 0.1 percent in the month on higher prices of medical care, shelter, recreation and tobacco. 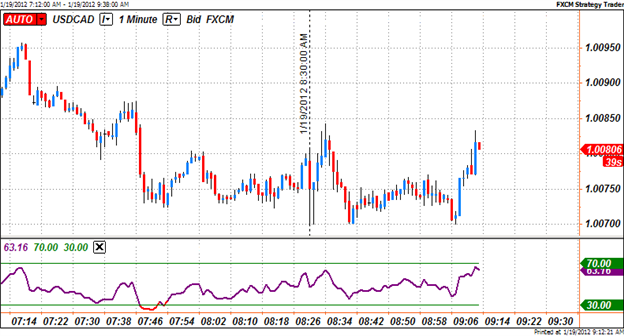 The U.S. dollar traded mixed ahead of the North America trading session today. The greenback strengthened versus the Japanese Yen and high-yielding currencies but weakens versus most of other major peers. The U.S. traded little changed following the inflation data release. As can be seen from the one-minute USDCAD chart above, the currency pair fluctuated in the narrow range between 1.0070 and 1.0085 within an hour. The Relative Strength Indicatorlying between the 30- and 70-level indicated neither overbought nor oversold market reactions regarding to the currency pair. At the time this report was written, a dollar trades at $C1.00806.