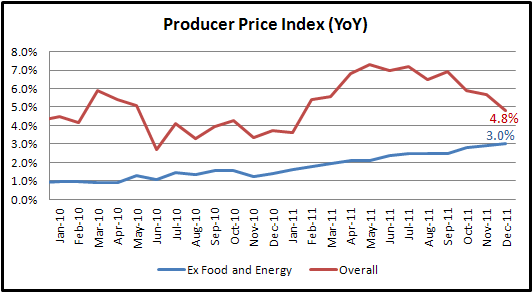 The report issued by the U.S. Bureau of Labor Statistics today revealed a cooling inflationary pressure on production line for the second time in three months in December, matching with Federal Reserve official Sandra Pianalto’s assessment on Tuesday that “outlook of U.S. inflation is pretty good” and “commodity prices are no longer trending higher”. The seasonally adjusted Producer Price Index for finished goods in the United States unexpectedly fell 0.1 percent in December, following a 0.3 percent gain in November and 0.3 percent drop in October. Meanwhile, economists surveyed by Bloomberg News had predicted for a rise of 0.1 percent. From a year earlier, the index moved up 4.8 percent, lower than 5.1 percent widely expected. In contrast, the less volatile index, excluding food and energy, rose 0.3 percent in December amid consensus forecast of merely 0.1 percent increase. On a yearly basis, the core index edged up 3.0 percent, above 2.8 percent initially projected.

Wholesale prices in the U.S. unexpectedly fell in December resulted from a considerable decline in energy goods and consumer food prices. The index for finished energy goods retreated 0.8 percent in December after increasing 0.1 percent in the previous month. The decline is mainly attributable to 2.3 percent plunge in gasoline prices. Also, lower prices in residential natural gas and diesel fuel partly contributed to the finished energy index. Besides, the index for intermediate materials, supplies and components slumped 0.5 percent in December, unwinding a 0.2 percent gain in November. The index for crude material for further processing tumbled 1.1 percent in the month, in which crude food costs dropped the most, 2.6 percent. Prices for crude energy slightly cooled down 0.1 percent as the result of 4.6 percent drop in natural gas. Meanwhile, prices for nonfood materials were unchanged. 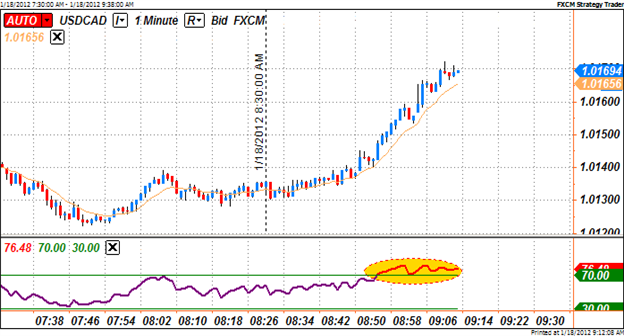 The U.S. dollar trades mixed ahead of the North America trading session today. The greenback strengthened versus the Japanese Yen, Canadian loonie but weakens versus most of other major currencies. The one-minute USDCAD chart above illustrated traders’ bullish reaction regarding to the USD/CAD pair following the release. The currency pair immediately hiked approximately 40 pips from 1.0130 to 1.0170 after the producer price index came in lower than projections. The Relative Strength Indicator crossing above 70-level, an overbought territory, indicated that market participants aggressively selling the loonie in favor of the greenback. At the time this report was written, a dollar traded at $C1.01694.