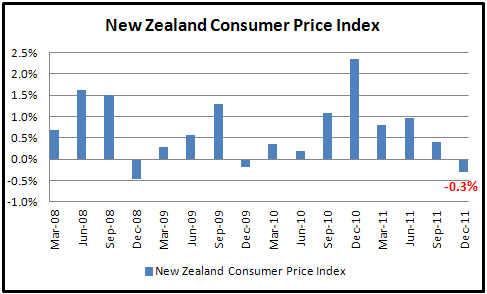 New Zealand economic activity deflated for the first time in 2 years in the final three months of 2011, eliminating most of the possibility of rate hike in the central bank meeting next week. The Consumer Price Index, which released on a quarterly term, unexpectedly dropped 0.3 percent in the fourth quarter, Statistics New Zealand reported today. The print follows a rise of 0.4 percent in the September 2011 quarter and 1.0 percent in the June 2011 quarter. Inflation data surprised the market participants as economists polled by the Bloomberg News had widely projected for a gain of 0.4 percent. In the year to the December 2011 quarter, the Consumer Price Index rose 1.8 percent compared to 4.6 percent increase for the year to the September 2011 quarter. The reading missed consensus forecast of 2.6 percent also. 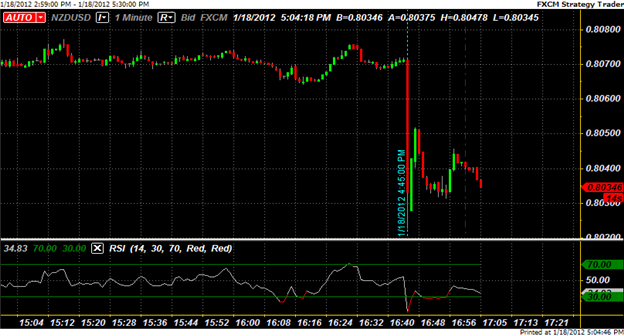 The kiwi strengthened versus most of its major peers except its euro and Swiss franc trading partners during the North American trading session today. Regardless, soft inflation report triggered a bearish reaction in the New Zealand dollar. As can be seen from the one-minute NZDUSD chart above, the NZD/USD pair immediately plunged 40 pips from 0.8070 to 0.8030. The Relative Strength Indicator crossing below 30-level, an oversold territory, indicated that currency traders were aggressively selling the kiwi in favor of the greenback. At the time this report was written, the currency pair traded at 0.80346.