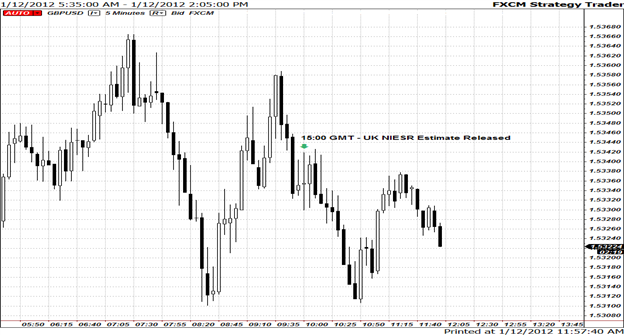 The latest release from the National Institute of Economic and Social Research (NIESR) estimated that U.K.’s Gross Domestic Product rose only 0.1 percent in the fourth quarter, compared with growth of 0.3 percent in the three months through to November. The economy grew 0.6 percent in the third quarter, and NIESR estimates that the economy expanded by 1 percent last year, down from 2.1 percent growth in 2010.

On the upside, the estimates show continued growth in the economy, with surveys suggesting strengthening in the services and construction industries last month. However, uncertainty in the euro area continue to pose significant downside risks to the U.K. economy.

The Bank of England kept its target for bond purchases at 275 billion pounds. Citigroup Inc. and Royal Bank of Scotland Group Plc are amongst the banks expected to increase their target next month when the current round of purchases end.

The release of NIESR’s estimates for a slowing growth of the U.K. economy saw the British pound fall against the U.S. dollar, with the GBP/USD pair dropping 73 pips to $1.53280 before making a slight recovery. While uncertainty in the Euro area continues to impede growth in the U.K. and elsewhere, there may be reasons to be optimistic, following today’s briefing by the ECB indicating a cautious, yet somewhat positive outlook on the direction of the euro area economy.