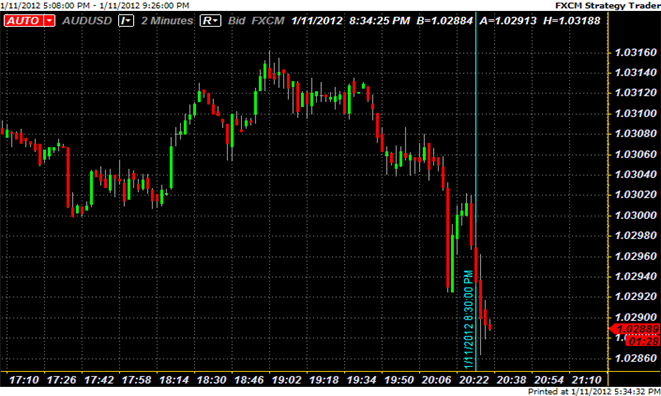 THE TAKEAWAY: Chinese inflation in December falls to 4.1 percent > Figure slightly higher than expected, dampens some of the bias in favor of Chinese monetary easing > Aussie, Kiwi slightly weaker

The Australian and New Zealand Dollars weakened slightly versus the US Dollar after data released on Wednesday revealed Chinese consumer prices a touch higher than expected in December. The Aussie traded 10 pips lower at 1.0286 against its US counterpart, while the Kiwi dropped from 79.62 to 79.54 US cents. Both currencies rebounded shortly after the data print.

The change in CPI in December was 4.1 percent year-over-year, slightly lower than November’s 4.2 percent rate, the lowest since the inflation gauge peaked at 6.5 percent in July. However, the figure was higher than the 4.0 percent consensus estimate. As in previous months, the main driver of the increase was food prices, which rose 9.1 percent. Producer prices rose 1.7 percent year-over-year.

While the data showed that inflation in China continued to trend lower, the smaller than expected drop in the inflation rate was enough to dampen expectations of significant further monetary easing in the world’s second-largest economy, a factor that weighed on the two South Pacific currencies. This, coupled with improving Chinese economic data – from manufacturing to the export sector – could lead Chinese policymakers to adopt a “wait-and-see” approach following November’s reserve-requirement cut. In the meantime, markets will be focused on the RBNZ rate decision on January 26, the EU leaders’ summit on January 30, and the RBA rate decision on February 1 for further guidance on the Aussie and Kiwi.