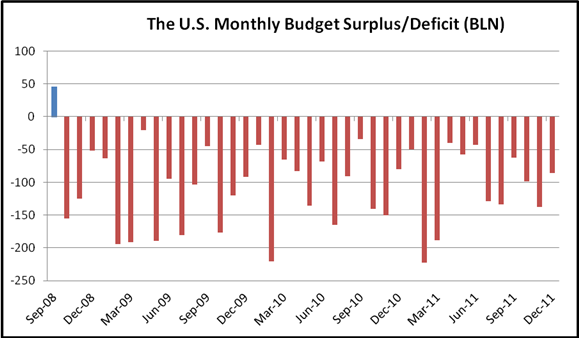 The monthly budget statement released today showed that the deficit for December narrowed to $86 billion from $137.3 billion in the previous month while economists widely expected a deficit of $83.7 billion. The gap between spending and revenue was reduced in the month as an increase in receipts is considerably larger than a gain in outlays. Receipts climbed to $239.96 billion from $152.40 billion in December while outlays rose to $289.70 billion from $325.93 billion. From a year earlier, total receipts grew 1.3 percent while total spending expanded 3.5 percent.

U.S. government ran its 39th straight monthly budget deficit in December; however the fiscal year to date improved, decreasing by $47 billion. The budget deficit being eased helps save the U.S. fate. Standard and Poor’s for the first time downgraded the U.S.‘s AAA credit rating one note to AA+ in August mostly due to the lawmakers’ failure in reducing the more than $1 trillion budget deficit. The rating is threatened to be cut to AA within two years if budget deficit continues to be higher than agreed to. $86 billion deficit in December push the total budget shortfall for the first quarter of fiscal year 2012 to $322 billion. For the next presidential race, President Barack Obama may offer more proposals to reduce deficit in his fiscal 2013 budget plan. 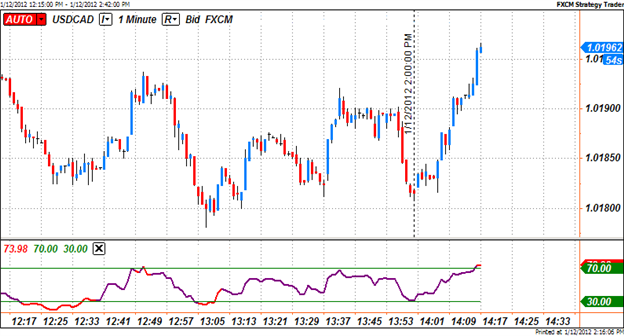 Market participants showed mixed reactions regarding to the greenback following the monthly budget statement. As can be seen from the one-minute USDCAD chart above, the currency pair hiked about 15 pips from 1.0181 to 1.0196. The Relative Strength Indicatortouches a 70-level indicated that market participants were massively buying the greenback while cutting their loonie holdings.