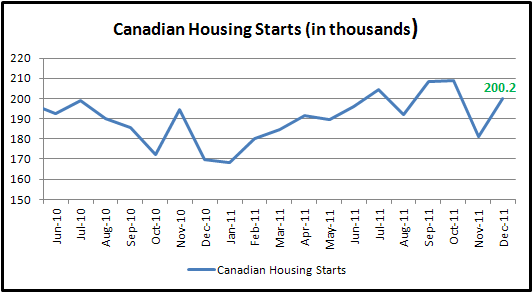 Canadian housing starts unexpectedly rebounded in December after plunging to the lowest level in eight months in November, bolstered by significant recovery in urban multi-family. The seasonally adjusted annual rate of housing starts rose 7.9 percent to 200,200 in December from an upwardly revised 185,600 in the previous month, Canada Mortgage and Housing Corp. reported today. The print also beats consensus estimates as twenty economists surveyed by Bloomberg News had call for a smaller gain of 185,500. From a year earlier, Canadian dwelling starts increased 20.8 percent compared to a decline of 4.8 percent in November.

Canadian dwelling starts rose more than forecast in December as improvement in housing construction in urban areas compensated for continued deterioration in rural areas. Starts in metropolitan regions surprisingly climbed 10.1 percent to 181,900 in the month, following a 13.5 percent drop to 165,200 in November. The rise was mainly due to a significant surge in multi-family starts. Urban multiples, the most volatile component, rebounds 14.5 percent to 111,300. Meanwhile, urban singles also increased 3.8 percent to 70,600. In contrast, housing starts in rural areas tumbled 10.3 percent to 18,300, after falling 1.9 percent to 20.400 in November. On the regional basis, Ontario and Atlantic reported the strongest increase in starts while British Columbia and Prairies registered the biggest drop. 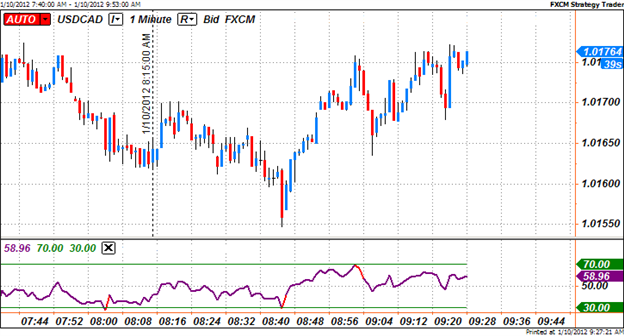 Canadian dollar lies in a group of winners in the North American trading session today. The loonie strengthens against most of major currencies except its Australian and New-Zealand partners. As can be seen from 1-minute USDCAD chart above, the currency pair transitorily dropped about 15 pips from 1.0170 to 1.0155 after the housing starts report. However, the initial reaction was rapidly corrected after 25 minutes and the USD/CAD pair increased to $1.0176. At the time this report was written, the loonie trades at $0.9825.