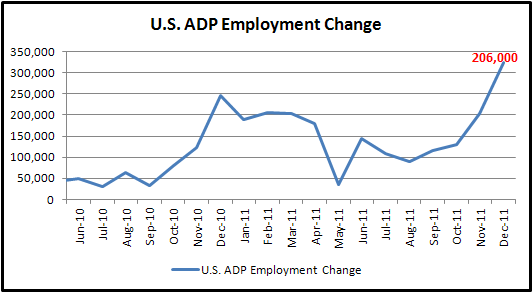 Job creation in the private sector hits the record level in December, a positive sign that U.S. labor market will continue to improve in year 2012. The monthly ADP National Employment report issued today showed that U.S. companies hired 325 thousand workers more in December after adding 204 thousand workers in November and 130 thousand in October. The print nearly doubles a median forecast from Bloomberg survey as thirty-eight economists called for the gain of merely 178 thousand, with the lowest projection of 125K and the highest estimate of 230K. November’s figure was revised downward to a gain of 204K thousand from 206 thousand. As the ADP employment change is considered a precursor to the non-farm payrolls number, a record number today raised hope that non-farm payrolls reading released this Friday might beat expectations as well.

Almost private firms reported significant gains in their payrolls in the last month of year 2011, led by service-producing sector. Service producer generated 273 thousand jobs in the month, following 176 gain in November and 139 increase in October. Also, employment in both manufacturing and good-producing sectors grew considerably in December. Factories added 22 thousand jobs, marking the second month gain in five. Increase in hiring in manufacturing was consistent with rising order in November. Besides, good producer hired 52 thousand employees more in December, double the number added in the previous month. Regarding to size-based companies, small firms registered the biggest increase of 148 thousand new payrolls while medium firms reported a somewhat lesser number of 140 thousand. Large firms created 37 thousand jobs in the month compared to 11 thousand added in November. 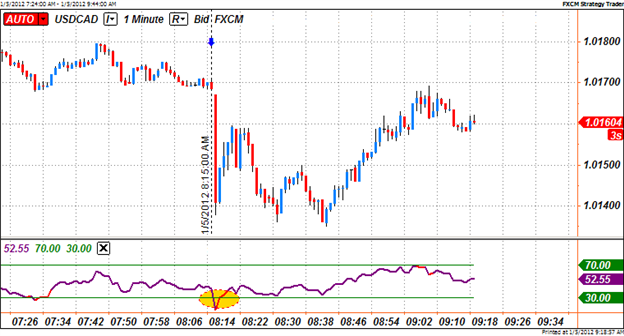 The U.S. dollar strengthens versus most of its major peers for the second day amid a surge of risk aversion. The greenback immediately pared gains versus risk-correlated currencies when the ADP employment change printed much better than estimated. As can be seen from the 1-minute USD/CAD chart above, the currency pair dropped approximately 30 pips from 1.0170 to 1.0140. However, the decline was just short-lived as the greenback rapidly resumed gain after thirty minutes. Investors now are closely watching nonfarm payrolls data and unemployment rate released tomorrow. Unemployment rate for the first time falls to 8.7 percent in November after hovering around 9 percent level for months. Economists predicted a gain of 175 thousand nonfarm payrolls added in December that would drive unemployment rate higher to 8.7 percent. Regardless, market participants are awaiting a big surprise tomorrow following the shocked ADP Employment change figure today.