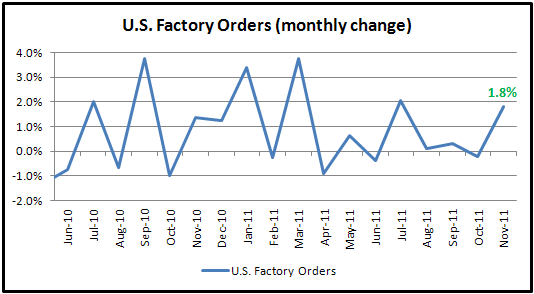 THE TAKEAWAY: U.S. Factory Orders Climbs the Most in Four Months in November> Economy Might Continue to Expand in Early 2012> USD extend gains

New orders placed with American factories in November advanced the most in four months, a positive sign that rebound in manufacturing sector will help stoke growth in the world’s largest economy in early 2012. A report issued today by Commerce Department showed that factory orders climbed 1.8 percent in November, following a revised 0.2 percent fall in the previous month. The print, however, misses consensus forecast as economists surveyed by Bloomberg News had called for a rise of 2 percent. Besides, October loss was revised higher to -0.2 percent from -0.4 percent initially reported in the preliminary reading.

New orders sharply picked up in November as a surge in demand for aircraft, autos and metals far more offset a drop in computers and electronics. Excluding transportation, new orders edged up 0.3 percent while excluding defense, new orders increased 3.7 percent. Meanwhile, unfilled orders gained for the nineteenth month in the last twenty months, rises 1.3 percent to $898.1 billion. In addition, inventories of manufactured durable goods reached highest level in the month, up 0.6 percent to $368.8 billion. 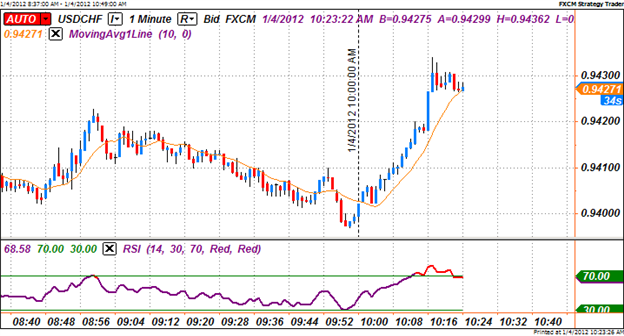 U.S. Dollar strengthens against most of its major trading partners in North American trading session today as appetite for risk in the first trading day seems to fade away amid worries about prolonged sovereign crisis in Eurozone. The 1-minute USD/CHF chart above illustrated 30-pip hike following the factory orders report. The greenback extended gains versus the Swiss franc from 0.9400 to 0.9430 within fifteen minutes. The Relative Strength Indicator crossing above the 70-level twice indicated that currency traders was massively purchasing the U.S. dollar instead of the franc. It is evident that the Swiss franc was trading under pressure amid allegations of “insider trading” of Swiss National Bank President Philipp Hiberand. At the time this report was written, the U.S. dollar traded at 0.9427 Swiss francs.