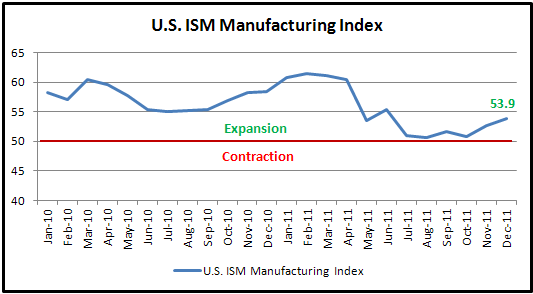 Manufacturing in the U.S. accelerated the most in six months in December as expansions were broad-based, led by gains in production, orders and employment . The ISM Manufacturing index, which tracks the amount of manufacturing activity occurred in the previous month, unexpectedly climbs 1.2 percent to 53.9 in December from 53.5 in November. The reading tops median forecast as economists polled by Bloomberg survey had anticipated a print of 53.5. The index stayed above 50-level for twenty-nine consecutive months, indicating sustainable growth in the manufacturing sector of the world’s largest economy. The annualized December PMI corresponded to 4 percent increase in real GDP annually, according to the report issued by Institute of Supply Management today.

ISM Prices Index, which reflects business sentiment regarding future inflation, came in at 47.5, lower than consensus forecast of 48.0. This was the third month of contraction in the prices index. Price pressures were reduced in eight of eighteen manufacturing industries in December compared to ten of eighteen in the previous month. The continued drop in prices is a “great relief”, especially for primary metal, petroleum and coal products, chemical products and machinery industries. 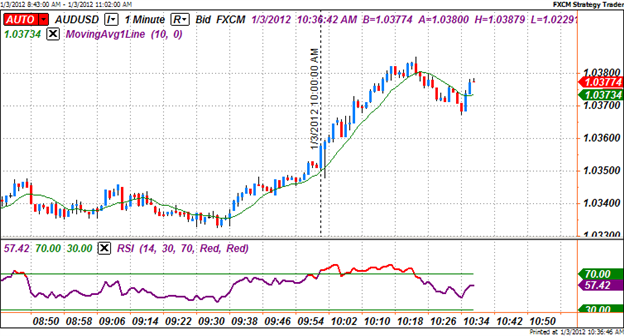 U.S. dollar is under pressure in North America trading session today as investors scale back appetite for risks on the first day of the New Year. The dollar extends loss after the ISM report show stronger-than-expected growth in U.S. manufacturing sector. As can be seen from the 1-minute AUD/USD chart above, the currency pair jumped more than 30 pips after ten minutes from 1.0350 to 1.0380. The Relative Strength Indicatorcrossing above 70-level, an overbought territory, indicated that forex trading crowds were aggressively buying the aussie while selling the greenback. At the time this report was written, the aussie was traded at 1.03774 U.S. dollar