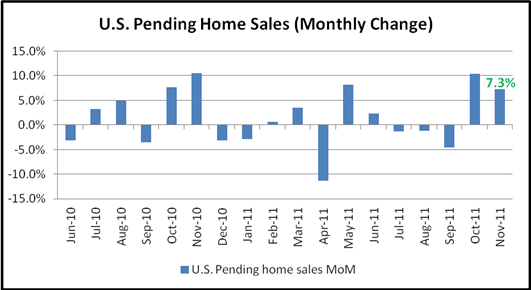 The pending sales of existing homes unexpectedly soared in November to the highest level since April 2010 as historically low mortgage interest rate coupled with slumping house price have made home purchases more affordable for middle class. The pending sales index, a forward-looking indicator that tracks home sales in which contract is signed but the sale has not yet closed, climbed 7.3 percent at a seasonally adjusted rate, following 10.4 percent pickup in October, National Association of Realtors reported today. The reading came in well above consensus forecast as economists surveyed by Bloomberg News anticipated a modest gain of 1.5 percent. Projections are highly volatile, ranging from a decline of 0.3 percent to a surge of 11 percent. From twelve months earlier, pending home sales advanced 6.9 percent in November compared to 7.3 percent in prior month.

All four regions throughout the United States witnessed the sizeable gains in November pending home sales. The West surprisingly registered for the largest percentage advance in sales, with 14.9 percent increase, after falling in three consecutive months. The Northeast held the second position with 8.1 percent rise, following 17.7 percent gain in October. Likewise, sales in the South and the Midwest edged up 4.3 percent and 3.3 percent, respectively. The sustained rise in contract activity suggests improved level of closed existing home sales in the following two month, however the recent high rate of contract cancellations makes future existing home sales uncertain until the sale is finalized within four to six weeks. “Housing affordability conditions are at a record high and there is a pent-up demand from buyers who have been on the sidelines, but contract failures have been running unusually high”, stated Lawrence Yun, NAR chief economist. 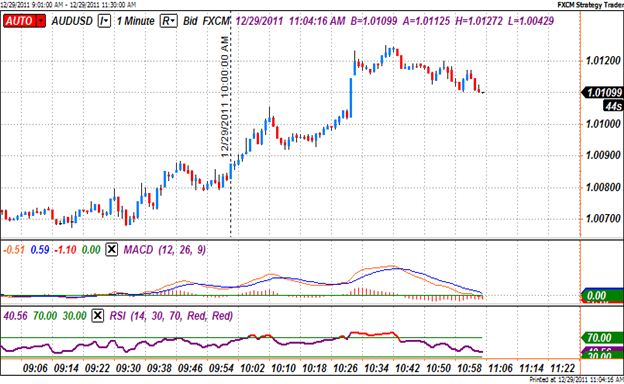 The U.S. dollar has weakened versus risk-correlated currencies in the North American trading session today on a shift of market sentiment and low trading volume during final trading days of the year. The appetite for risk scales back as housing report released today signals stronger economic growth in the U.S. in the intermediate future. The greenback extends loss following the pending home sales report. As can be seen from the one-minute AUDUSD chart above, the currency pair hiked approximately 40 pips from 1.0070 to 1.0120 within thirty minutes. The Relative Strength Indicator crossing above the 70-level indicated currency traders’ overbought reactions regarding to the aussie while cutting their dollar holdings. At the time this report was written, one Australian dollar traded at 1.0110 U.S. dollars.