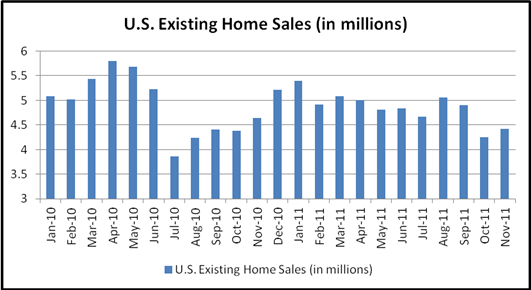 THE TAKEAWAY: The U.S. Existing Home Sales Rose > Gains in sales in Midwest and West compensates loss in Northeast >U.S. dollars strengthens versus most of its peers.

Sales of existing homes climbed in November as housing price drops paired with exceptionally low mortgage interest rate policy facilitate median-income families in median-priced home purchases. The report issued by the National Association of Realtors today showed that sales of existing homes rose 4.0 percent to a seasonally adjusted annual rate of 4.42 million in November from the revised 4.25 million in the previous month. The reading missed consensus forecast as economists from Bloomberg survey predicted a gain to 5.05 million. October reading was downwardly revised to 4.25 million from 4.97 million initially reported.

The Realtors concurrently released periodic benchmark revision to historic existing home sales in the report today. Sales and inventories during 2007-2010 downwardly revised by 14.3 percent, reflecting considerably weak housing activity since subprime mortgage crisis. However, the revisions are predicted to slightly affect future revisions on Gross Domestic Product. “From a consumer’s perspective, only the local market information matters, and there are no changes to local multiple listing service data or local supply-or-demand balance, or to local home prices”, explained Lawrence Yun, the group’s chief economists.

Existing home sales jumped in November as all of four regions reported gains in number of contracts to purchase previously owned dwellings. Northeast registered the largest percentage gain of 9.8 percent to 560 thousand. Meanwhile, Midwest announced 4.3 percent increase to a level of 960,000. Sales in the North advanced 2.4 percent to annual pace of 1.74 million while sales in the South picked up 2.4 percent to 1.74 million. 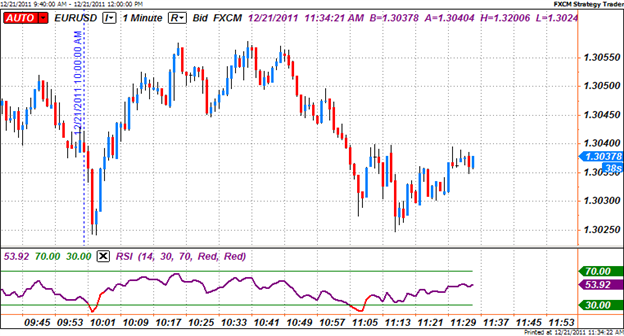 The U.S. dollar trades mixed following the existing home sale report. As can be seen from 1-minute EUR/USD, the currency pair jumped approximately 30 pips from 1.3025 to 1.3055 within forty minutes. However, the trend was reversed, pushing the pair down to 1.0325 level. The Relative Strength Indicatorbelow 30 indicated that market participants were massively selling the euro in favor of the greenback. At the time this report was written, an Euro traded at 1.0378 U.S. dollars.