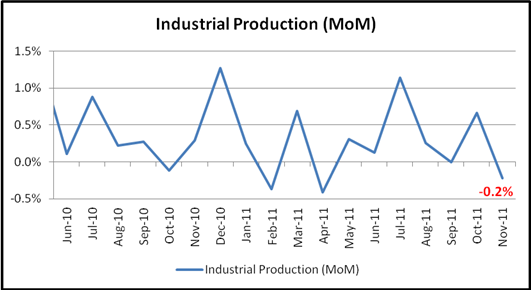 Industrial production in the United States disappointedly retreated in November for the first time since April 2011 on significant decline in factory outputs. The index of industrial production declined 0.2 percent in November after climbing 0.7 percent in October, according to figures released by Federal Reserve today. The reading missed consensus forecasts as economists polled by Bloomberg survey had projected for a gain of 0.1 percent. From twelve months earlier, total industrial production advanced 3.7 percent, though. Besides, capacity utilization for total industry for November decreased 0.2 percent to 77.8 percent from October, but still gained 2 percentage points from a year earlier.

Manufacturing output, which accounts for more than 70 percent of industrial productions, dropped 0.4 percent in November for the first time in seven months, triggered by 3.4 percent drop in the output of motor vehicles and parts. In contrast, the output of utilities rose 0.2 percent after three-month declines. Mining production registered a modest gain of 0.1 percent compared to an increase of 2.1 percent in October.

In terms of market groups, the production of consumer goods declined 0.5 percent due to decreases in automotive products, home electronics and furniture outputs. Besides, business equipment unexpectedly fell 0.1 percent, snapping five consecutive monthly gains. Nonindustrial supplies also tumbled 0.6 percent for the first time since April 2011. On the other hand, the production of construction supplies, the only positive contributor to the total outputs in November, posted a gain of 0.4 percent for the third consecutive month. The index for materials for further processing flatted in November after advancing 0.8 percent in the previous month as falls in the output of nondurable materials totally offset gains in durable materials. 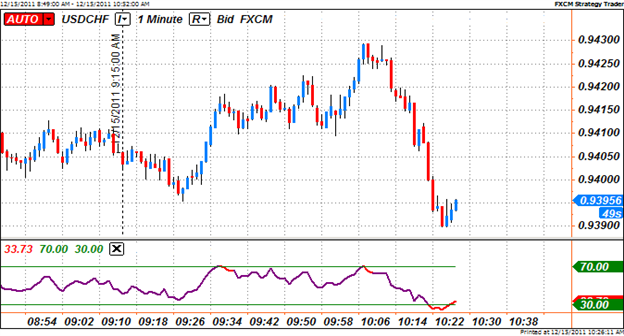 The U.S. dollar has weakened against most of major currencies in the North America trading session today, snapping three-day rally. Regardless, the greenback temporarily pared losses despite the industrial production was lower than consensus estimates. As can be seen from the chart above, the USD/CHF climbed about 30 pips from 0.9400 to 0.9430 45 minutes following the Industrial Production and Capacity Utilization report. However, the dollar rebound was unsustainable. At the time this report was written, the dollar slid again, trades at 0.9396 franc. TheRelative Strength Indicatorfalling below 30 indicated that market participants aggressively selling the dollar in favor of the Swiss franc. 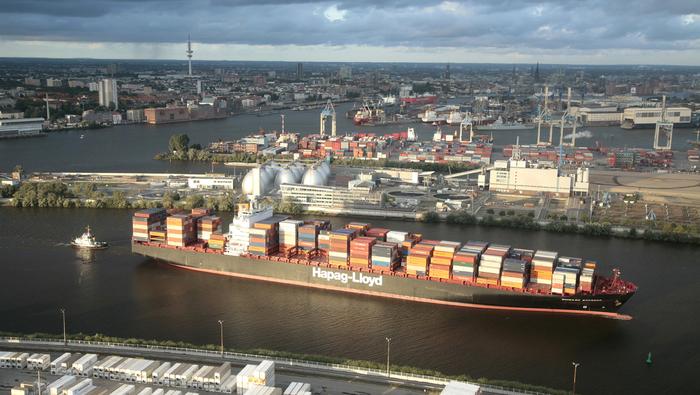