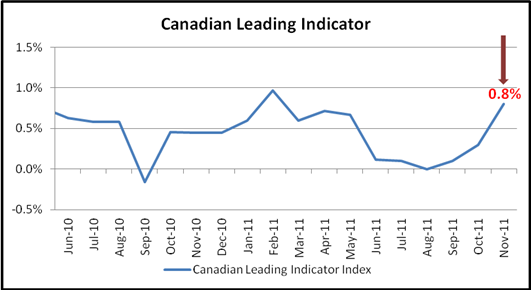 Canada’s composite leading indicators rose for the third straight month in November, led by significant surges in manufacturing triggered by some improvements in the United States economy. According to the report issued by Ottawa-based Statistics Canada today, the index surprisingly rises 0.8 percent in November, following a revised 0.3 percent advance in October and 0.1 percent increase in September. The reading came in well above consensus estimates as economists surveyed by the Bloomberg News had predicted a modest gain of 0.3 percent.

The composite leading indicator comprised of ten components which significantly affect cyclical activity in the economy and together represent major categories of Gross Domestic Product. November reading topped median forecasts as gains in seven components outweighed falls in other three remainders. Of seven positive contributors, all three manufacturing components picked up. New orders, durables posted a largest gain of 4.1 percent in November after disappointedly slumping in two previous month while other durable sales rises 0.7 percent, the same pace with October’s. Average manufacturing work week edges up 0.9 percent for second consecutive month. Besides, money supply posted another month gain, increasing 0.9 percent. In contrast, stocks index continued to fall 1.7 percent after declining 2.4 percent in October and sliding 3.5 percent in September. Housing index retreated 1.5 percent for the first time in three months as an increase in house sale was insufficient to offset a decrease in housing starts. 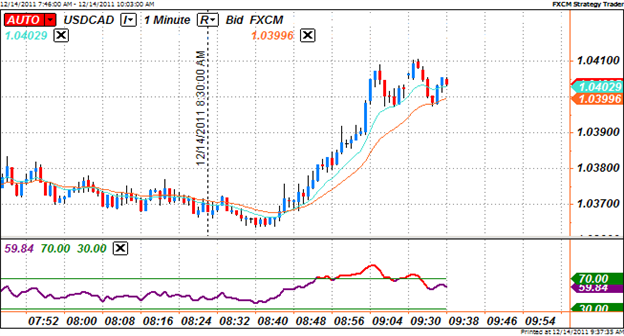 As can be seen from the one-minute USDCAD chart above, currency traders continues to be bearish on the loonie despite the leading indicator index for November climbed the most in five months. The USD/CAD suddenly jumped more than 45 pips from 1.0365 to 1.0410. The currency pair stayed above its 10- and 20-minute moving average exponential lines, meaning the pair traded at more than average price of exchange rate over 10- and 20-minute time frame. Moreover, theRelative Strength Indicatorcrossing above 70-level, an overbought territory, for more than forty-five minutes indicated that foreign exchange crowd were aggressively gaining their greenback holdings to replace loonie sell-off. The U.S. dollar has accelerated for the second day today since risk aversion dominated after EU summit failed to calm investors’ fears on spreading debt crisis. At the time this report was written, Canadian dollar fell to C$1.0403 per U.S. dollar.