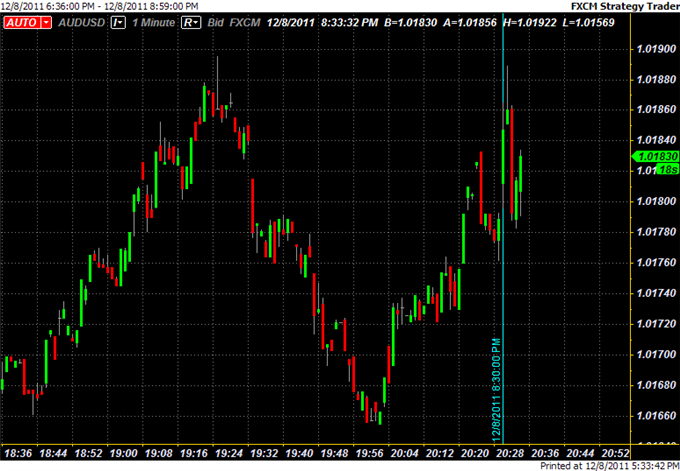 The Australian and New Zealand Dollars were largely unchanged after China released CPI figures indicating a marked deceleration in inflationary pressures. Both currencies briefly moved higher by no more than 15 pips immediately following the release before retracing; despite the possibility of further monetary easing in the two nations’ top trading partner, markets remain focused on the EU summit, which continues into Friday. 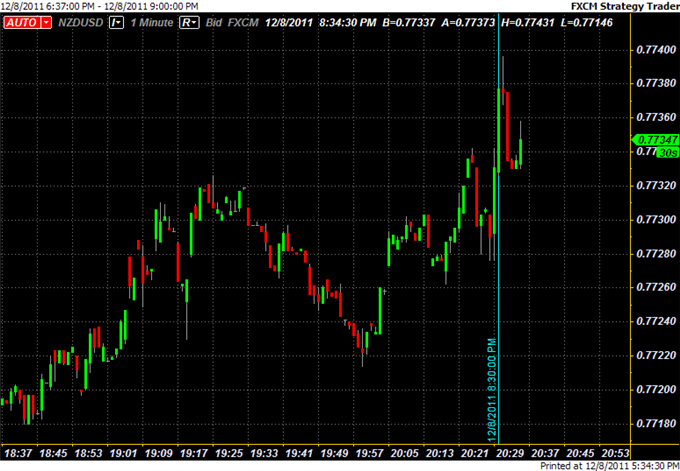 According to the National Bureau of Statistics, overall consumer prices in the world’s second-largest economy rose 4.2 percent YoY in November, a marked slowdown from October’s 5.5 percent increase and lower than consensus estimates of 4.5 percent. The lower rate represents a continuation of an overall disinflationary trend since the gauge peaked at 6.5 percent in July. Food-price inflation fell to the single digits, rising 8.8 percent, while consumer goods prices rose 5 percent. Producer prices also decelerated significantly, falling to 2.7 percent from 5 percent a month earlier.

Friday’s inflation data is largely in line with signs that the Chinese economy is cooling amid an unresolved European debt crisis, stress in the property market, and concerns about the health of the domestic banking sector. The effects of this slowdown are already highly visible; the Chinese manufacturing PMI indicator in November moved into contraction territory for the first time since 2009, while the non-manufacturing PMI plunged to 49.7 from 57.7. Meanwhile, the Citigroup economic surprise index for China – a measure of whether data releases surprised on the upside or downside – has been negative since October and continues to trend downward.

In response, Chinese policymakers on Nov. 30 cut the bank reserve requirement by 50 bps; the first cut since 2008. Interest rate cuts could follow, as priced in by Chinese rate swaps. Two-year swaps on the 1-year deposit rate – a measure of what markets expect the PBOC’s benchmark rate to average over the next two years – currently trade at 3.19 percent; by comparison, the current PBOC deposit rate is 3.5 percent.

Despite the economic slowdown in the two South Pacific economies’ top export market, China is expected to avert a “hard landing”, and demand for raw materials and mining investment will likely remain relatively robust. In the near term, risk trends tied to Eurozone developments – especially amid signs of discord over possible EU treaty amendments to impose sanctions on nations with excessive deficits – and monetary policy in Australia and New Zealand will continue to play a paramount role in shaping the Aussie and Kiwi.