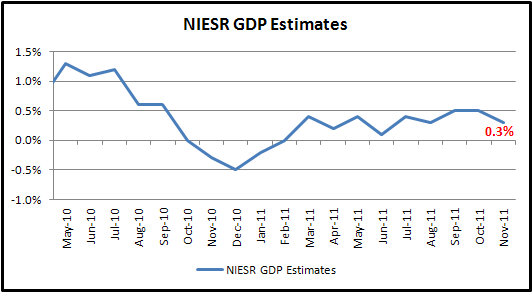 The report issued by National Institute of Economic and Social Research (NIESR) today showed that U.K. economy might expand at lower pace in the three months ending in November, lending support for further quantitative easing . U.K. Gross Domestic Product was forecasted to grow 0.3 percent in three months through November, following a 0.4 percent advance in the quarter through October and 0.5 percent expansion in the quarter through September. October reading was downwardly revised to 0.4 percent from 0.5 percent initially reported. Though output declines again, the recession is reported to be over while the period of depression probably continues in the intermediate future.

U.K. economic growth remains modest in the quarter ending in November as declines in industry and construction outputs partly offset gains in agriculture products and private and public services. Construction output might edge down 1.2 percent, marking the third month in the row contraction. Likewise, industry output probably decreased 1.7 percent compared to 0.7 percent loss in the previous period. In contrast, outputs in both private and public sectors might continue to rise since the beginning of this year, growing 1.6 percent and 1.3 percent, respectively. Agriculture production was predicted to gain at the lower pace of 2.6 percent compared to 3.3 percent in the previous phase. As the NIESR employs statistical projection techniques, its estimates are very close to those for official GDPnumbers and thus highly respected. It is evident that the NIESR report today reinforces speculation on further loosening of U.K. monetary policy. 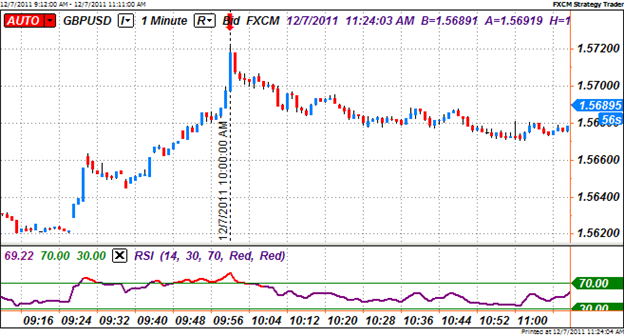 British pound have strengthened against most of its major trading partners in the North America trading session today because foreign exchange traders raise their speculations ahead tomorrow’s Monetary Policy Committee meeting. However, the sterling immediately pared gains following the NIESR Gross Domestic Product release. As can be seen from the 1-minute GBPUSD chart above, the GBP/USD pair dropped approximately 60 pips from 1.5720 to 1.5680. At the time this report was written, the British pound trades at 1.5680 U.S. dollar. Among crucial fundamental data and key rate decisions released tomorrow, the results of MPC meeting will be particularly closely watched. England benchmark interest rate was widely expected to hold at its record low 0.5 percent but additional quantitative easing is highly possible since U.K. has been facing significant headwinds from the euro area’s intensified sovereign debt crisis.