Standard & Poor’s followed through on their threat to begin the process to downgrade Euro-zone member states, following the region’s leaders’ inability to implement sustainable structural changes that would ensure the future of the common market. The rating agency noted the following five “interrelated factors” as the primary reasons for placing the 15 nations on CreditWatch negative:

With the Euro-zone summit at the end of this week, there should be a great deal of clarity on the future prospects of the Euro-zone in just a few days. Standard & Poor’s recognize the severity of this situation, and while those on CreditWatch negative are usually pegged at a one-in-two chance of having their rating downgraded within 90-days, the rating agency has expedited this process. To wit:

As expected, the EUR/USD has faced increased downside pressure, though the true reaction may not occur until Asian markets opened. Indeed, the reaction to the actual news in illiquid market conditions was muted at best, following the 80-pip drop off experienced earlier in the day. Similarly, the commodity currencies, after bouncing back into the U.S. session close, pared their gains and fell back towards U.S. session lows on the news. Now that Standard & Poor’s has fired the first shot across the Euro-zone bow, we expect the other rating agencies to follow suit in the coming days, though market reaction to those announcements will likely be less severe.

The biggest fundamental theme and catalyst for the global financial markets currently is the progress of the European financial crisis. More than just a regional problem, the structural troubles in the Euro Zone represents a potent catalyst for the rest of world’s financial markets to tip an already-evident economic slowdown into a global market crisis and tipping point for a second round recession (much like the US subprime housing crisis was the spark for the 2008 collapse).

Unlike the 2008 situation, this go-around has not come up as a surprise for the broader markets. We have seen conditions deteriorate consistently through multiple, supposedly ‘comprehensive’ bailout efforts over the past year-and-a-half. And, in that time, it has been easy for economists, the media and regular traders to connect the dots as to how this can lead to a repeat of the sheer panic that is still fresh in the mind. Making this even more complicated is the reality that the options are fewer this time around as the standard venues have already been exhausted and there are more policy officials believing the best solution would be to allow the market to decide the fate of efforts like keeping Greece in the Euro Zone.

Intensifying pressure, we are now coming to the point that the standard approach of ‘buying time’ is losing all effectiveness. Providing a genuine solution to the undertow of the Euro Zone’s crisis could very well require a supranatural rescue (possibly outright IMF and Fed assistance) or the jettisoning of profligate EU members (starting with Greece). Such changes would likely come only under the most dire circumstances and therefore would not likely come unless the hour was too late. As such, policy makers offer short-term solution in a hope that it will stabilize sentiment long enough for the broader markets to recover and boost optimism with it. The half life of these efforts is clearly shortening with each iteration; leading the market to more clearly see the end game.

With the market already zeroing in on the few outcomes for this problem; we have seen skepticism build and the pressure for risk unwinding growing. In turn, we have seen a slew of individual downgrades for Euro-area countries by the rating agencies (Italy, Spain, Portugal, Ireland, Greece, etc); but nothing comprehensive – until potentially now. According to early reports from the Financial Times and Bloomberg, their sources are suggesting Standard & Poor’s will soon place all 17 of the Euro Zone countries on review for possible downgrade in the near future (in rating parlance ‘placing them on credit watch negative’).

This could have the very severe effect of cutting the top credit ratings of the region’s largest members: Germany and France. In the limited range of options available to the EU at this point, such a move would mean that the hotly debated EFSF bond potential would fall apart as they wouldn’t be viable for a AAA status as the individual countries that back the guarantees may not carry the highest rating. Though this was not a popular option before hand, it would only further limit the possibilities and market participants will be more aware of the few options and track each as they fail going forward.

For market impact, a ‘sell the rumor, buy the news’ effect would be expected. Both the euro and risk appetite trends in general would suffer as the market ran through the possible, extreme negative effects this would have. The euro and benchmark sentiment indicators (the S&P 500 is a favorite) have responded; but the immediate impact is so far restrained. This could be a sign that the actual announcement could have a greater influence on selling and general risk wind down. 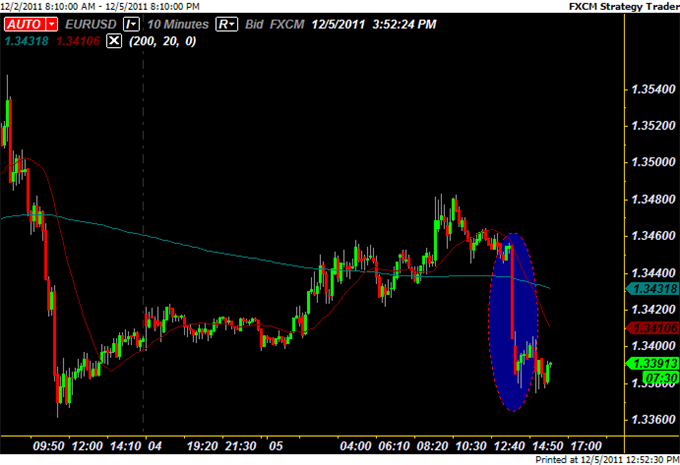 Regardless, it is arguable that risk positioning is still over-leveraged given the current status of the economy and financial markets – much less the possibilities that lie ahead. If the broader markets are holding out for a grand bailout (QE3 or the equivalent in the Euro Zone and possibly globally); then they further pull themselves away from a feasible fundamental reality. This is especially true as the crisis continues to move beyond the cut off points for the solutions that officials right off until it is too late. 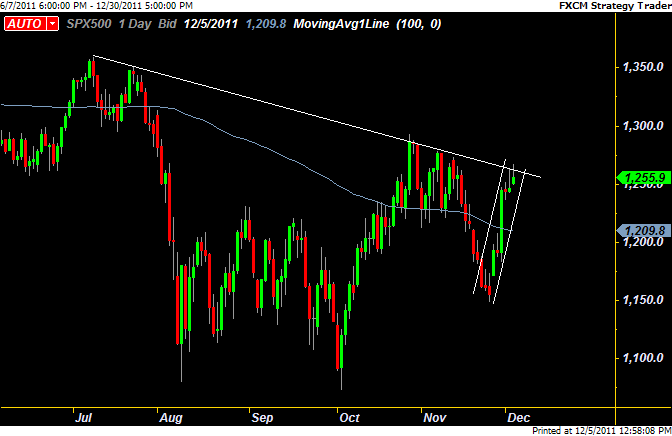