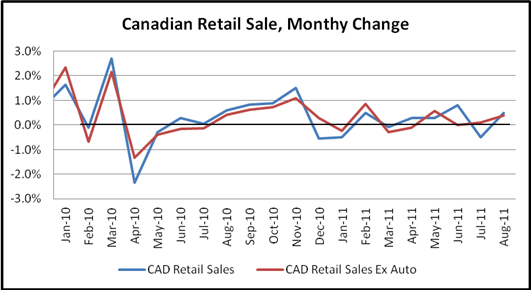 Canadian retail sales unexpectedly rose 0.5 percent to a seasonally adjusted C$37.8 billion in August after tumbling 0.5 percent in July, according to Statistics Canada report today. The reading also beats the consensus estimates as economists polled by Bloomberg survey had projected a 0.4 percent gain. The less volatile figure, excluding auto sector, comes in at 0.4 percent higher than the previous month, topping forecasts of 0.3 percent advance. July’s figure was revised upward to 0.1 percent from preliminary of 0.0 percent.

Retail sales rebounded in August as a result of improvements in six of eleven major categories, led by gains in gasoline stations, car dealerships, and furniture and home furnishings. Gasoline stations experienced the largest increase by 1.9 percent from July and 20.6 percent from a year earlier. Likewise, automotive sector jumped 1.0 percent after retreating 2.8 percent in a preceding month, in which new automobile sales rose 0.7 percent and used car sales edged up 1.8 percent. Besides, furniture and home furnishings soared 1.6 percent that might be explained by strong housing sector condition and enhanced employment situation recently. Regarding to region, retail sales mounted in eight of thirteen provinces, among which Alberta and Newfoundland registered for the largest gain, 1.4 percent and 1.0 percent, respectively. On the other hand, sales in Nova Scotia and Northwest Territories dropped the most, 2.3 percent and 1.4 percent, respectively. 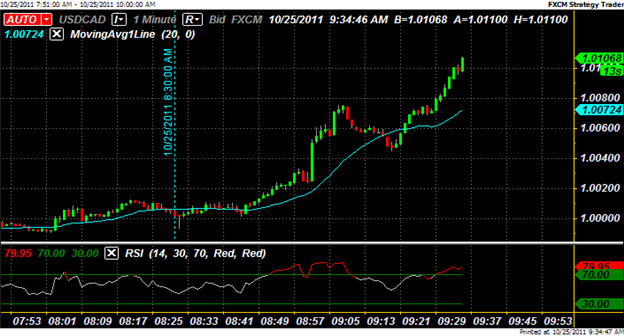 The loonie lose its footings as Bank of Canada decision overweighs better-than-forecast retail sales data. The one-minute USDCAD chart above illustrated that the currency pair jumped about 100 pips from 1.0000 to 1.0106. The Relative Strength Indicator (RSI) above 70 indicated that the currency pair was in overbought territory. Foreign exchange traders have been aggressively selling the loonie in favor of the greenback. At the time this report was written, Canadian dollar extends loss to C$1.0107 in Toronto trading. The RSI still holds above 70-level, signaling that monetary managers continue cutting loonie holdings in their portfolio. The bearish reactions regarding to the loonie mainly because the Central Bank held the benchmark rate at 1.00 percent and kept the wait-and-see approach for the remainder of the year despite of stronger fundamental data recently. 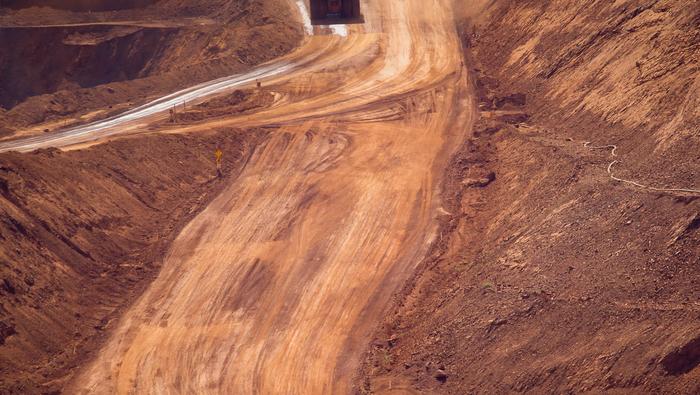