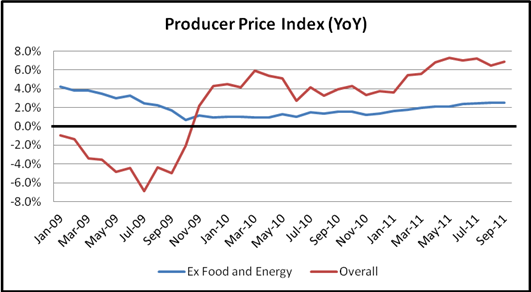 The report issued by the U.S. Bureau of Labor Statistics today showed that the seasonally adjusted Producer Price Index for finished goods unexpectedly jumped to 0.8 percent in September, after remaining unchanged in August and climbing 0.2 percent in July. Meanwhile, economists polled by Bloomberg survey called for the reading of a mere 0.2 percent. From a year prior, the index advanced 6.9 percent, much higher than 6.4 percent forecasted. The core index, excluding volatile food and energy, printed at 0.2 percent on month-over-month basis and 2.5 percent on year-over-year basis.

Wholesale prices in the U.S. climbed more than forecast in September as a result of escalating gasoline, food and crude material prices. The index for finished energy goods rallied 2.3 percent after falling in three preceding months that was mainly triggered by 4.2 percent rise in gasoline cost. Likewise, prices for finished consumer foods moved up by 0.6 percent for the fourth straight month in a row. Besides, the index for intermediate materials, supplies and components edged up 0.5 percent in September, unwinding a 0.5 percent drop in August. The index for crude materials for further processing also rose 2.8 percent in which crude energy materials advanced the most, 7.7 percent in the month. On the other hand, producer price index for net output of transportation and warehousing industries declined 0.9 percent in September, eclipsing the climb in producer prices. 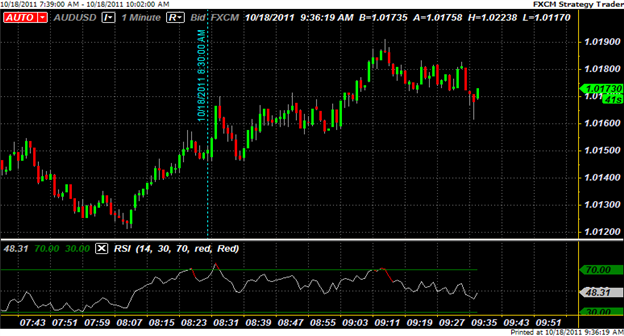 The one-minute AUDUSD chart above illustrated traders’ bearish reaction regarding to the greenback after the Producer Price Index came in higher than projections. The aussie gained its footing twenty minutes before the report came out and continued its upward trend within an hour following the release. The currency pair extended its gains by 40 pips from 1.050 to 1.0190. The Relative Strength Indicator (RSI), an oscillator indicating when a currency is overbought or oversold, touched the 70-level, signaling that foreign exchange traders aggressively bought the high-yielding currency and cut their greenback holdings. Despite the latest FOMC meeting’s minutes was optimistic about inflation that would be “likely to decline moderately over time”, the figures today obviously once again heightened concerns about inflationary pressure on the production line in the United States in the intermediate future.