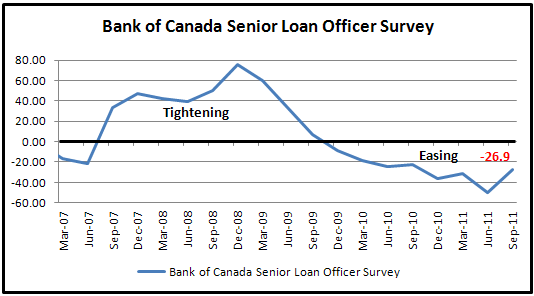 THE TAKEAWAY: Bank of Canada Senior Loan Officer Survey is below zero for eight consecutive quarters > Business-lending condition is less easy than the previous quarter >Reactions on Canadian Dollar mix.

The Bank of Canada Senior Loan Officer Survey today showed that Canadian lending officers, on balance, were expected to have eased up on credit conditions in the third quarter of year 2011. The survey gathers the quarterly perspective of respondents on price and non-prices terms of business lending of Canadian financial institutions, with the results above zero indicating tightening credit terms and the figures below zero pointing to easing ones. Balance of opinion regarding overall business-lending condition for the third quarter comes in at negative 26.9, following a negative 49.6 from the previous survey. The reading also reveals the diminishing degree of consensus on easing due to rising costs of capital in some segments. Both the price and non-pricing elements of credit loosed during the third quarter, with fewer opinions on easing condition than the preceding quarter, though.

Third quarter of year 2011 marked the ninth straight quarter of net easing lending conditions for corporate borrowers and sixth consecutive quarter for commercial borrowers. Besides, the balance of opinion in terms of demand for credit from financial institutions also edged up during the third quarter for “general purposes”, according to the survey. 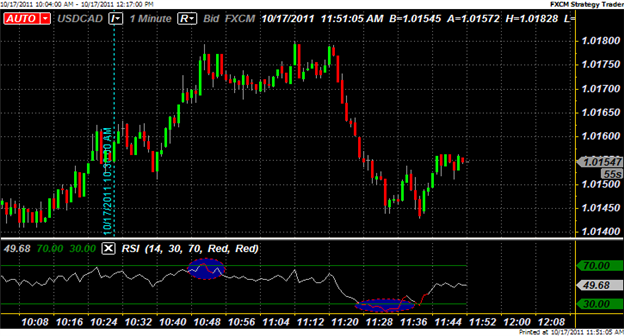 Following the release, currency market has witnessed mixed reactions regarding to the loonie. As can be seen from the 1-minute USDCAD chart above, the USD/CAD pair jumped approximately 30 basis points from nearly 1.0150 to 1.0180 fifty minutes after the Bank of Canada Senior Loan Survey pointed to the easing lending condition for the eight consecutive periods. The Relative Strength Indicator crossed above 70-level, indicating overbought reactions regarding to the currency pair. Nonetheless, bullish reactions on the greenback were just short-lived. The currency pair then shifted to downward trend and the USDCAD pair immediately plunged 35 pips from 1.0180 to 1.0145. The Relative Strength Indicator fell below 30-level, signaling that foreign exchange crowd aggressively sold the greenback in favor of the loonie. At the time this report was written, the Canadian dollar traded at C$1.0154 per U.S. dollar.