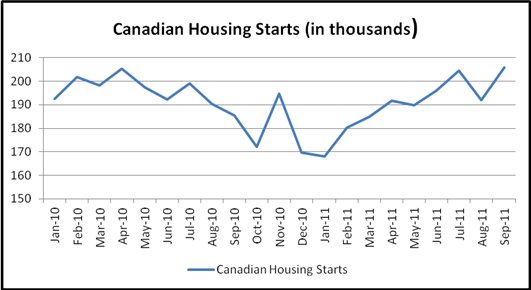 Canada Mortgage and Housing Corp. reported today that Canadian housing starts surprisingly jumped 7.3 percent to 205,900 at a seasonally adjusted annual pace in September from an upwardly revised 191,900 in August. From a year prior, the nation’s housing starts advanced 11.1 percent. The figure beats the median forecasts as economists polled by Bloomberg survey had only called for the reading of 190,000. As a barometer measuring the strength of Canada’s construction sector and housing market and a leading indicator for the economy for the whole, the housing starts picking up in September from the fall in a preceding month is a good sign for Canadian housing demand and raises hopes that the country might maintain its consistent pace of economic growth in near term.

Gains in multi-family and urban areas mainly contributed to the surge in housing starts in Canada in September. Multi-family starts rose 14.2 percent to 118,000 from 103,300 in the previous month. Likewise, starts in urban areas edged up 8 percent to 185,900 from 172,200. Rural area starts also slightly improved 1.5 percent to 20,000. In contrast, single family starts decreased 1.5 percent to 67,900. On the regional basis for urban areas, Atlantic region, Quebec and British Columbia registered the strongest increase. Specifically, starts in Quebec increased to 50,700 from 38,400 in August, starts in Atlantic moved up to 12,200 from 8300 and starts in British Columbia gained to 27,400 from 23,100. 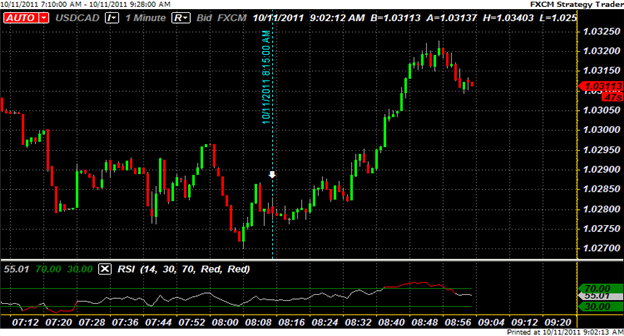 The CAD/USD traded in a narrow range within five minutes before and after the housing starts data released. The Canadian dollar suddenly loses its ground against the greenback after twenty minutes despite the figure printed better than forecast. As can be seen from the 1-minute USDCAD chart above, the currency pair rapidly hiked 45 pips from 1.0280 to 1.0325. The Relative Strength Indicator rose above 70 to the oversold territory, signaling that that foreign exchange trading crowd was massively selling the loonie in favor of the greenback. It is obvious that intensified sovereign debt crisis in Europe, slow recovery in the United States and slowdown in emerging countries plummeted investors’ sentiments and forced currency traders to seek for safe havens. At the time this report was written, the Canada’s dollar traded at C$1.0311 per greenback in Toronto.